The Pistons spoiled Jokic’s nice comeback, stopped in need of a triple-double 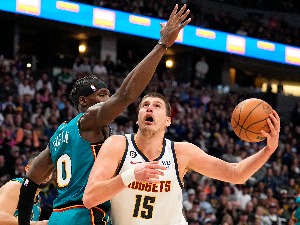 The best player of the Nuggets went through the covid protocol, it was seen that he was not positive and soon he returned to the court in a superb way.

It remains regrettable that he did not register a victory after his return, especially on the home field and after an excellent game. The Pistons took the victory from Colorado, leading most of the game, as if the “Ball” arena was theirs. It was the Nuggets who were catching up and fighting for every point of the lead.

The guests had a 103:93 advantage in the middle of the last part, then the comeback began, but not the reversal of the Nuggets, who reached a point behind through Jokić’s penalties. There was too little time to possibly win overtime.

Cade Cunningham did not play for Detroit, but veteran Bojan Bogdanovic was in good spirits with 22 points and nine assists. He was followed by experienced Alec Burks with 21 and Kevin Knox with 17 points.

Among the Nuggets, Jokic was followed by Michael Porter Jr. with 18 points, then Aaron Gordon with one less point, Bruce Brown contributed with 11, while Jamal Murray failed with 10 points.

The third-ranked team in the West, the Nuggets, will start visiting the Oklahoma City Thunder and the Los Angeles Clippers.