The primary volleyball match of champions in Uzice 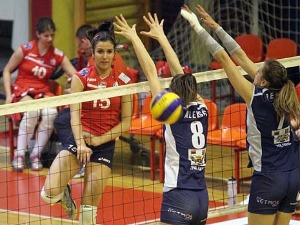 For trophy at the tournament in Uzice the teams OK Crvena Zvezda, OK Tent, OK Ub and the host team OK Jedinstvo are fighting.

The sports director of OK Jedinstvo, Vesna Čitaković Đurišić, says that this tournament is only for champions and that she hopes that it will become a tradition.

“My emotions returned to the period when Jedinstvo was raging, when we were inviolable in everything for 10 years. I wanted to return that volleyball to Cetinje for at least two days. Only the champions, ie four teams, play the tournament,” said Čitaković Đurišić.

The tournament served as a good sparring for the volleyball players of these champion clubs.

“Uzice is a city of sports and when you think of volleyball, the first thing you think of is Uzice. For so many years, volleyball players have been champions, so we are very honored to be here. Also, the teams are very good. There are several national teams, Red A star that won a lot, and there is also Tent who was the champion, and so are we “, said the captain of OK Ub, Ljiljana Ranković.

The people of Užice had the opportunity to see a good competition, and they also saw why Užice used to be a temple of volleyball.

“I would like to thank everyone for the opportunity to participate in this beautiful tournament. It is a great organization, a nice atmosphere in the stands,” said the general director of OK Red Star Nikola Rosic and added that volleyball is the most beautiful sport for girls and that there are still many young people. who would like to play this sport.

The city of Uzice is the patron of this sports competition, and 400 thousand dinars were set aside for its holding.

Arteta tells about Xhaka’s condition, after he became infected with coronavirus – Latest News