The purpose was victory, the followers gave us the wind at our backs 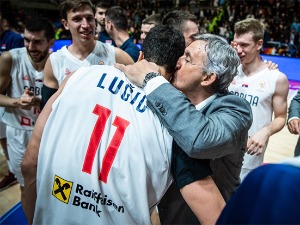 In an uncertain match full of charges, Serbia defeated Turkey and took a big step towards qualifying for the Mundobasket, which will be played next year in Japan, Indonesia and the Philippines, and Pešić at one point got into a verbal conflict with Ataman, who later complained about the refereeing.

“This was a difficult game. For them, this was decisive and they had to win. After our triumph in Istanbul, and then in Belgrade, we are in the lead. There was no saving. We had a goal to win and we did it. The group is really fantastic. We have national team players who have freed themselves. Everyone who played was motivated and it’s great when players want to play for the national team,” said Pešić at the press conference and added:

“I wouldn’t talk too much about Ataman, it’s an integral part of the match. If he won, he wouldn’t be disappointed.

“Here in the Aleksandar Nikolić hall, it is known that when they play there is always a great atmosphere, like this one. The fans welcomed us brilliantly, gave us the wind at our backs. You remember when we played against Latvia, and there were only a few hundred spectators. some players asked ‘who are we playing for’. Now the fans have recognized the moment when we need support. Thanks to them, this is a joint victory”.

Turkey had the last attack of the match, but the whole team was great in defense and stopped Scotty Wilbekin.

“I just said to Tarlac, I didn’t know if we should make a foul, so that we have the last attack. We had a low five on the field. I brought Mitrović back so that he could take over. There is always some risk and without risk there is no success. On the field we had the best defenders. You saw when we took over with Lucic and it was a fantastic defense”.

Pešić singled out the performance of Dušan Ristic.

“Today, everyone knows everything, so there aren’t many secrets when it comes to scouting. Before joining the national team, Ristic scored 23 points in the Endesa League. He likes playing in Spain and we look forward to seeing him here. Although he is a center, he is very intelligent because knows how to hide flaws and show virtues,” concluded Pešić.