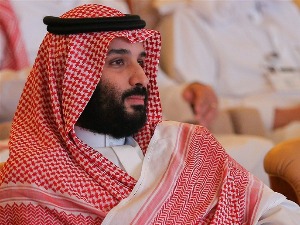 The executive branch of the US government, ie the Biden administration, determined that in the case the murder of Jamal Khashoggi “The defendant Mohammed bin Salman, as the current head of a foreign government, enjoys head of state immunity from the jurisdiction of US courts,” Reuters reports a statement from the US Department of Defense lawyer.

The decision of the American administration was strongly condemned by the fiancee of the murdered Khashoggi, who filed a lawsuit against the Saudi prince.

“Jamal died again today. We thought there would be justice from the US, but money comes first again,” Khatija Cengiz said on Twitter.

A reversal in Biden’s stance

This is a reversal from earlier views expressed by Biden during the 2019 presidential campaign, in which he blamed the Saudi crown prince for involvement in the killing of Jamal Khashoggi on October 2, 2018 in Istanbul, AP reports.

By royal decree in September, it was decided that the heir to the throne would also take over the post of prime minister from his father.

The Biden administration announced on November 17 that it believed he was protected from possible criminal prosecution in the US, following a lawsuit against Mohammed bin Salman and others filed by Cengiz with the human rights organization “Democracy for the Arab World Now”, which Khashoggi himself and founded.

The State Department called the Biden administration’s call to shield the Saudi crown prince from US courts in the Khashoggi murder case a “purely legal decision.”

A federal judge in Washington has given the US government until midnight on November 17 to issue an opinion on a claim by the crown prince’s lawyers that Prince Mohammed’s high official position is grounds for immunity in the case.

The Biden administration also had the option not to express an opinion in any way, according to the AP.

Sovereignty-based immunity, a concept rooted in international law, holds that states and their officials are protected from certain legal proceedings before the domestic courts of other foreign states.

Path Cleared for Georgia to Launch Work Requirements for Medicaid