There aren’t any favorites, the stakes are excessive, however now we have analyzed the opponent nicely 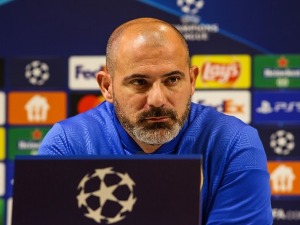 On Wednesday at 9:00 p.m., the Red Star players will face Maccabi in Haifa as part of the Champions League playoffs.

“We have seen Maccabi’s matches so far, as well as ours. We had time to analyze each other because this is a double match of great stakes. We have a lot of respect for Maccabi, they did something important, especially by knocking out the favored Olympiakos, and on the wings of that success they welcome tomorrow’s duel. A rematch awaits us in Belgrade, and the braver and more cautious team will go on,” said the Red Star strategist.

Stanković added that there are no favorites at this stage of the competition.

“There are no favorites here. The details will decide. Both teams are good, they have experience and they have played games like this. The stakes are high and small details will decide who will go through. I don’t see an extreme favorite. We will play in two hot stadiums, and the small advantage is that we are playing the second leg on our home field in front of 55,000 people where the referee’s whistle will not be heard.”

All the tickets for the duel are sold out, and Crvena zvezda decided not to do the last training session on the road in Israel.

“The pitch is always the same and I don’t believe anything can change. If we had a training session in front of 35,000 people it would have an impact, but an empty stadium is the same everywhere. All you can do away from home is a bit of a lark. We used the morning to do another tactical training in Belgrade is not the first time we have decided to do so”.

“We know every player from Maccabi, the standard 13-14 in particular. We scouted everything about them, we know the good sides, and we will try to find the bad ones. The game is not won by one player. It is won by the team, the players who are on the bench and those who are left in Belgrade… This is what the team gets, experience. You can’t just get to the playoffs of the Champions League,” concluded the coach of the Serbian champions.