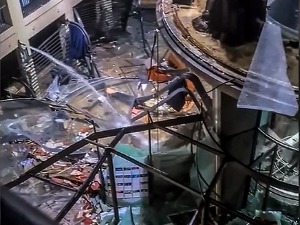 The police are warning the public about what they say is a fake tweet suggesting that a manhunt has been launched.

A police source confirmed to local media that there is no evidence that the explosion in the 15.85-meter-high aquarium was the result of a targeted attack.

The aquarium that exploded is the largest free-standing cylindrical aquarium in the world, in which, at the time of the incident, there were about 1,500 exotic fish, and two people were injured as a result of the explosion, emergency services announced.

The Berlin police announced via social networks that the incident caused enormous damage.

The 14-meter-high aquarium was located in a complex that also houses the Radisson Hotel, a museum, shops and restaurants.

The construction of the aquarium alone cost 12.8 million euros.