Three days of mourning for the crime within the Russian college, the motives of the assault are being investigated 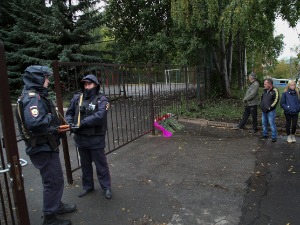 The attacker, a man in his early thirties, who has been identified as Artem Kazantsev he killed 15 peopleincluding 11 children, and injured 24 people in a school in Russia, after which he killed himself, Russian investigators announced.

“He killed two guards, and then opened fire on students and teachers at school number 88 in Izhevsk, which he himself once attended,” the investigators added.

Russian media reports that Kazantsev was treated in a psychiatric hospital.

On the other hand, the Russian Investigative Committee, which deals with major crimes, announced that it was investigating the perpetrator’s suspected ties to neo-Nazism.

“Investigators are currently conducting a search of his residence and are studying the identity of the attacker, his attitudes and environment. Checks are being conducted on his commitment to neo-fascist views and Nazi ideology,” the committee said in a statement.

A video has been released showing a man’s body lying in a classroom with overturned furniture and papers scattered on the bloody floor.

The attacker was dressed in black, with a red swastika on his T-shirt, he was armed with two manually adapted pistols for firing live ammunition and had a total of 10 rounds of 9 mm caliber ammunition with “hate” written on them in red, she said. the press service of the National Guard department of the Udmurt region, reports Tas.

Assistant to the Russian Minister of Health Alexei Kuznetsov said that a group of doctors is traveling to Izhevsk to help the victims of the shooting, Interfax reported.

According to him, 14 emergency teams were sent to the school where 80 teachers work and 982 students attend.