We do not know all the outcomes, however the massive “crimson wave” did not occur 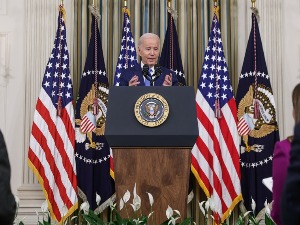 Joseph Biden is speaking after elections for Congress said that American democracy was on trial in the past years, but that the people had their say.

He said that election day was a good day for democracy, reports Reuters. “Voters have clearly signaled that they want to preserve our democracy,” said the US president.

He said that there was no big wave of victories for the Republican Party.

“We don’t know all the results, but the big red wave didn’t happen,” Biden said.

Biden said he expects to decide early next year whether to run for another four-year term.

He reiterated that he intends to run for office again, but that it is a family decision and that he will consult with family members over the holidays.

Russia has “real problems” with its military

When it comes to the war in UkraineBiden assessed that the Russian order to evacuate troops from the western bank of the Dnieper River near the city of Kherson showed that Russia has “real problems” with its army.

He noted that it was interesting that Russia, he said, was waiting for the results of the US Congressional elections to be announced.

The withdrawal will allow both sides to determine their positions over the winter, but it remains to be seen whether Ukraine is ready to compromise with Russia, the US president said.