We modified our speech 9 occasions, we took care of each phrase 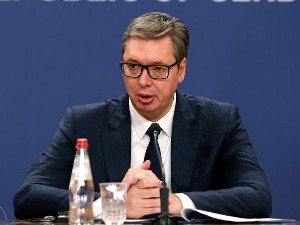 Aleksandar Vučić, in an interview with Tanjug, said that they changed the speech nine times, took care of every word, and that he believes that it will be an interesting speech.

“Perhaps I will defend our position a shade more harshly. To be honest, we don’t have much of a choice. The handicap is that I will be speaking directly behind Ukrainian President Volodymyr Zelensky. The entire Western Hemisphere is on his side. Any word that would differ from him cannot and will not to meet the approval of our Western partners. But we cannot and will not renounce our policies and attitudes, least of all our country,” said Vučić.

He asked the citizens to watch his speech tonight and see if his team and he made a good speech, emphasizing that every word, proverb, quote was taken care of.

“Perhaps those who delve deeper into the essence of politics will understand what we are going to say. Much more important than evaluating someone’s speech is the situation we are in today,” the president pointed out.

Vučić reminded that he had already announced that the most difficult situation was to come and that then complete hysteria would occur.

“Trains from all stations have started – from Berlin, London, Washington, no one will stop their machinery anymore. When elephants are fighting, we have to hide. But they will not allow us to be invisible. They will not tolerate Serbia’s libertarian, fair attitudes. they don’t care, just like in 1999 when they bombed us,” emphasized Vučić.

He pointed out that no one will ask anything except to order us to do the same as they do.

“It is important for us to point out the need to preserve the peace, which will not be easy. Kurti accuses us of many things. Our team made the decision that everyone is fed up with our mutual accusations,” added Vučić.

In the economy, he says, the price of oil has risen, and he expects that in the coming days, when the situation escalates, it will be increasingly difficult.

“There are still six months and 10 days left until the end of the period that I marked as crucial. There are huge changes. Some countries will come out of the crisis easily, some will not be able to bear it, they will collapse and lose their economic sovereignty. There is still a lot to do, to fight, to be skillful and resourceful,” concluded Vučić.