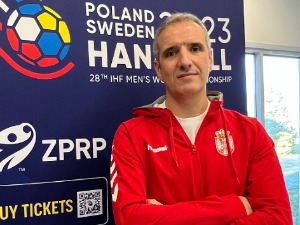 Serbia will play against Algeria in the first round of Group E of the World Cup in Katowice on Friday at 8:30 p.m.

“A completely different match awaits us compared to what we played against Sweden and that’s why we have to be alert. It will be challenging, but we have done a detailed analysis, we have another training session when we will work on the finesse of our game and the final preparation of tactics before tomorrow game,” said Girona at the press conference, as reported by the website RSS.

The atmosphere in the team is excellent, it was like that even after the defeat against Sweden in the first preparatory game, Girona emphasized.

“All the players who are here are healthy, we managed to recover them from the games and travel and prepare them well physically for the challenge that awaits Serbia tomorrow,” said Đerona.

Cupara: I’m excited and grateful to be here

The goalkeeper of the Serbian team, Vladimir Cupara, has been playing at the top level for years and has experience in major competitions, but he enters the duel with Algeria very cautiously.

“I am excited and grateful to be here, as well as the fact that all of us except Dejan Milosavljev are medically ready to respond to the request, but what I know is that he is also getting better and will join us soon. My expectations are always high, but I try to control them so that they are not counterproductive. As for Algeria, it is important to me that we win, regardless of the result, and that we play our game from the beginning to the end of the game,” Cupara said.

Marko Milosavljević points out that despite the fact that the preparatory games played against the Swedish team were at a high level, the Serbian national team strives for a better and better game.

“We are all satisfied with the number of minutes and the game we showed, but the real games only start tomorrow. We are going and expect to win in the first match. Premier League games are always very difficult, but for us there is no other option but to win. I would like to win opportunity, to do my best and contribute to the team in the way that is required of me,” said Milosavljević.

He emphasizes that the atmosphere in the team is incredible and that it can hardly be described until you see it.

“I see all the older players as older brothers. I respect them all, while I especially enjoy the humor of Miloš Orbović, which most of my teammates can confirm,” says Milosavljević.