Winter Crossing Day, one ought to wash garments and clear the home 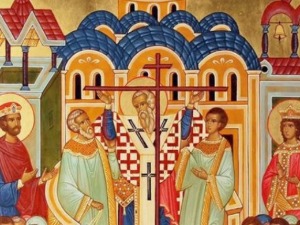 Winter Epiphany is celebrated as a memory of the first Christians who received faith at the very beginning of Christian preaching.

The holiday is associated with the Epiphany and baptism of Jesus Christ, as well as the day dedicated to Saint John the Baptist, who baptized the son of God in the Jordan River.

The Fall Day of the Cross, on September 27 according to the new calendar, commemorates the finding of the Holy Cross on Golgotha ​​on which the Son of God was crucified.

On this day, after the liturgy, the act of water consecration is performed in the temples, tomorrow on Epiphany, the water is also sanctified outside the temple, on rivers and other open places.

From Christmas to Epiphany, all days are fast, but on the Day of the Cross, no matter what day it is from Monday to Friday, there is a strict fast, on the water. If it falls on Saturday and Sunday, the fast is resolved on oil.

With this fast, we are preparing for the feast of Epiphany and for drinking Epiphany water.

Our people believe that tonight at midnight, before Epiphany, the sky opens and God appears to people. One waits for midnight, and then the wish should be uttered with a prayer.

According to folk customs in some parts of Serbia, it is appropriate to wash all the clothes and clean the house on Christmas Day.

Fasting strictly, for the first time after Christmas, because until this day there was a release due to the big holiday. That is why the Serbian people have a saying: “Whoever is baptized with a cross, that Cross Day fasts”.

According to popular weather forecasting, whichever wind blows on Christmas Day, that wind will blow most often during the year.

In Srem, it was said that on this day the winds cross (i.e. cross, blow towards each other), so which prevails.

In twelve days, starting from Christmas and ending with the Day of the Cross, the twelve months of the coming year are reflected, so the weather on which day will be the same in the month that corresponds to that day in order.

On Christmas Day, according to the chroniclers, the remains of Christmas beans were eaten and – pihtijas were prepared. But since the Day of the Cross is a fast day, they ate them the next day, on Epiphany.