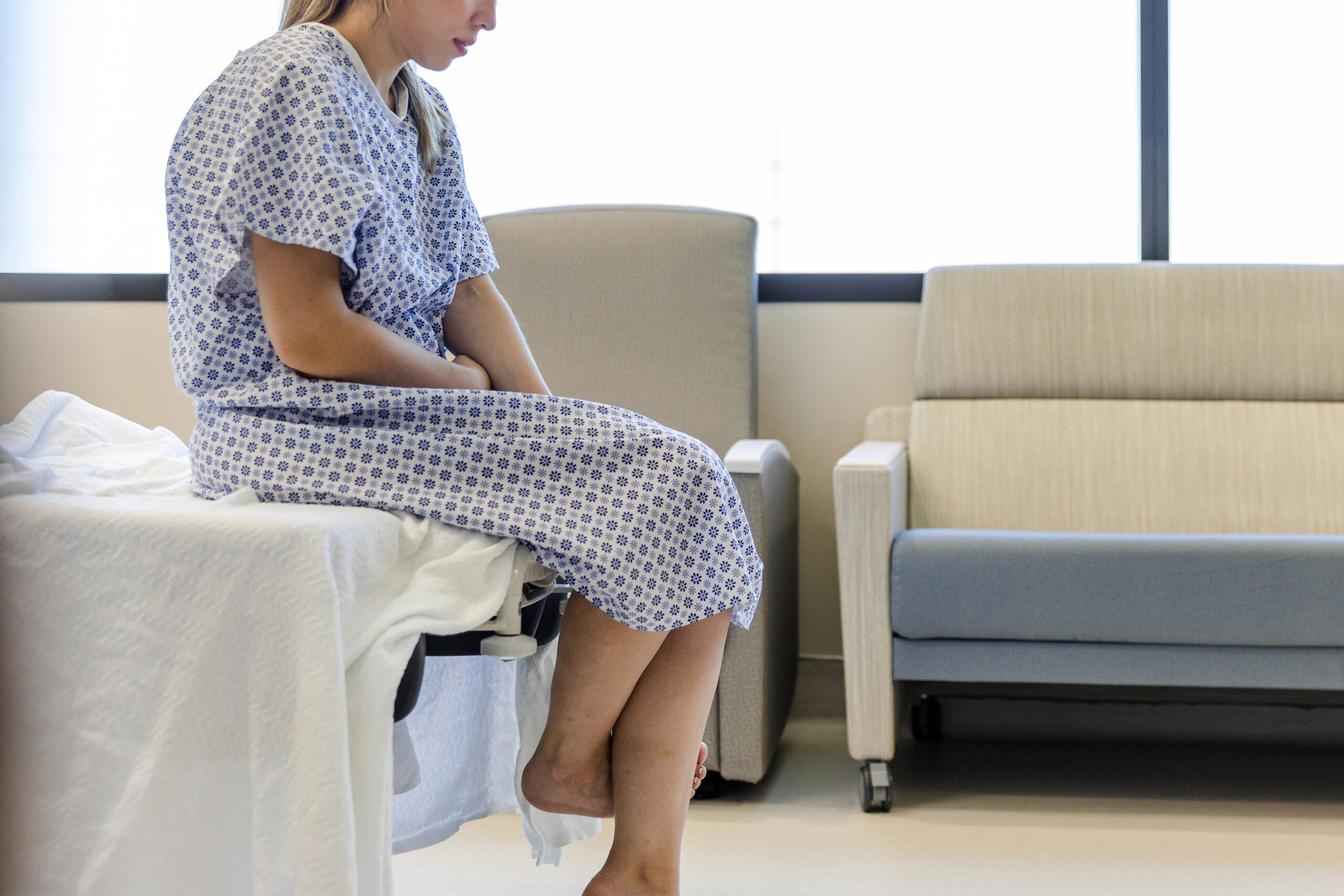 When Sara Laub’s period was late, the New York City resident shrugged it off. She’d used an intrauterine device, or IUD, for three years and knew her odds of getting pregnant were extremely slim. But after 10 days had passed, Laub, 28, took a home test in early July and got unwelcome news: She was pregnant.

Laub went to a Planned Parenthood clinic because she knew someone could see her immediately there. An ultrasound found no sign of a developing embryo in her uterus. That pointed to the possibility that Laub might have an ectopic pregnancy, in which a fertilized egg implants somewhere outside the uterus, usually in a fallopian tube.

Such pregnancies are rare, occurring roughly 2% of the time, but they are extremely dangerous because a growing embryo might rupture the tiny tube, causing massive and potentially life-threatening internal bleeding. Laub was experiencing no pain, bleeding, or other obvious symptoms of trouble. Still, a Planned Parenthood staffer recommended that she go to a hospital emergency department right away.

Laub didn’t realize it, but she was embarking on a lengthy — and very expensive — treatment to end the pregnancy. Even in a state that strongly supports a person’s right to make her own choices regarding pregnancy — New York legalized abortion in 1970, three years before Roe v. Wade made it legal nationwide — Laub’s experience shows the process can be arduous.

An ectopic pregnancy in the fallopian tube is never viable. But following the June reversal of Roe by the Supreme Court, reproductive health experts say treatment may be dangerously delayed as some states move to limit abortion services.

Some of those consequences are already being noted in Texas, where strict abortion limits were instituted last fall before the Supreme Court’s decision. Since abortion is now allowed in Texas only in medical emergencies, doctors might wait to perform abortions until pregnant patients are facing life-threatening complications in order to comply with the law.

“In Texas, we saw people not treating ectopic pregnancies until they ruptured,” said Dr. Kristyn Brandi, an obstetrician-gynecologist in Montclair, New Jersey, who is board chair of Physicians for Reproductive Health, which supports abortion rights.

The 2021 Texas law banned most abortions at about six weeks of pregnancy. University of Texas-Austin researchers interviewed doctors about the impact of the law on maternal and fetal care. A specialist at one unnamed hospital said the facility no longer offers treatment for certain ectopic pregnancies.

About half of states have enacted restrictions on abortion or are trying to do so.

Laub, who is being identified by her middle and last name because of her concerns about privacy, said she couldn’t help thinking about the recent Supreme Court decision as she went through diagnosis and treatment.

“As scary as my ordeal felt at the time, I was acutely aware that I was fortunate to have easy access to treatment, and elsewhere women with my condition face much worse experiences,” Laub said.

At Lenox Hill Hospital’s emergency department on New York’s Upper East Side, doctors ran more tests and gave Laub two options: an injection of methotrexate, a cancer drug that destroys rapidly dividing cells and is often used to end an ectopic pregnancy, or surgery to remove her fallopian tube, where the fertilized egg was lodged.

Laub opted for the injection. After getting the shot, patients need follow-up hormone blood tests to confirm that the pregnancy is ending. Laub returned to the emergency department for bloodwork and an ultrasound three days after the shot. She returned again three days later and was given a second shot of methotrexate since the pregnancy hadn’t terminated. The following week, she repeated the treatment in two follow-up visits. On July 20, after 12 days and five emergency department visits, Laub was scheduled for laparoscopic surgery to remove her fallopian tube.

The total charges to date for the medical treatment: an eye-popping $80,000. Because her health plan had negotiated discounted rates with the hospital and the other providers, all of whom were in her provider network, Laub’s out-of-pocket cost will be only a fraction of that total. It now appears Laub will owe a little more than $4,000.

“On the one hand, I feel grateful that I was able to get treated when I was not in an acute state,” Laub said. “But it’s an awful feeling to know that the decision I made as to the best path forward for care comes at such a high cost.”

The hospital pointed out, however, that its charges were reduced by Laub’s insurer discount. “Charges are based on the specific services provided in the treatment of the patient,” said Barbara Osborn, vice president of public relations at Northwell Health, a system that includes Lenox Hill Hospital. “Any amount due from the patient is based upon the benefit design and cost sharing provisions of the patient’s insurance plan.”

Understanding hospital charges can be a head-scratcher since they often don’t appear to align with the actual cost of providing care. That’s true in this case. According to a breakdown by WellRithms, a company that analyzes medical bills for self-funded companies and others, on average Lenox Hill Hospital charges $12,541 for the surgery that Laub underwent, based on publicly available data that hospitals submit to the federal Centers for Medicare & Medicaid Services. But the hospital charged Laub’s health plan $45,020.

“Hospitals will charge whatever they can,” said Jordan Weintraub, vice president of claims at the Portland, Oregon, company. “They put it on the payer to deny items rather than billing appropriately.”

Even more revealing is how much it actually costs the hospital to perform the surgery. According to WellRithms’ analysis of the federal data, Lenox Hill’s cost to perform the laparoscopic procedure is $3,750. The average cost statewide is $2,747.

Nationally, the average outpatient charge for the surgical procedure Laub received is $13,670, according to data from Fair Health, a nonprofit that manages a large database of health insurance claims. The average total amount paid by the health plan and patient is $6,541.

Many women opt for methotrexate over surgery to treat ectopic pregnancy. The drug is successful between 70% and 95% of the time without requiring surgery.

The drug is often administered at a hospital because OB-GYNs are unlikely to keep the cancer drug in their offices, experts say. After the injection, patients must be followed closely until the pregnancy ends, because the risk of a life-threatening rupture remains. In addition, patients must get bloodwork at intervals after an injection to confirm that their pregnancy hormone levels are falling.

After receiving her first injection at the emergency department, Laub was told she needed to return for follow-up bloodwork after each injection. Charges for those emergency department visits were likely significantly higher than the charges would have been had Laub received follow-up care from an OB-GYN in an outpatient setting. The hospital charged between $4,700 and $5,400 for each of those follow-up visits. Laub’s share of the cost was about $500 each time.

“She had a long course of treatment, and if it was all done through the emergency room that would be unfortunate,” said Dr. Deborah Bartz, an OB-GYN at Brigham and Women’s Hospital in Boston. “It would be really nice if instead she could have been worked into the outpatient setting with a protocol for managing surveillance.”

In a statement, Osborn defended the hospital’s approach.

“Ectopic pregnancies, which can be life-threatening conditions, require close surveillance and management to ensure a successful resolution,” Osborn said. “The emergency setting allows for immediate availability of critical surgical services, as was ultimately necessary in this patient’s case.”