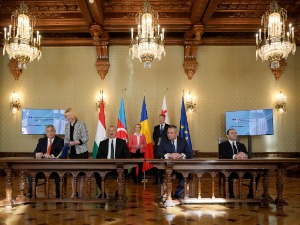 The leaders of Azerbaijan, Georgia, Romania and Hungary signed an agreement in Bucharest on the transport of clean energy via an underwater electric cable in the Black Sea from Azerbaijan to Europe, Ađerpress agency reports.

On that occasion, von der Leyen emphasized that the EU’s strategy is to abandon Russian fossil fuels and to turn to clean energy sources with reliable energy partners. “The European Union managed to compensate for the reduction of Russian gas.

“We are not only talking about managing the new geopolitical situation. It is about creating a future for us in terms of clean, accessible and safe sources of energy, which are forms of renewable energy,” said the president of the European Commission.

Von der Leyen pointed out that the EU is ready to provide financial support to that project once a feasibility study is done.

The President of the EC said that this project will connect the two coasts of the Black Sea and beyond with the Caspian Sea region, both digitally and energetically, and that the electric cable under the Black Sea offers multiple possibilities.

The agreement stipulates that a 1,100-kilometer-long, 1,000-megawatt electric cable runs under the Black Sea, from Azerbaijan to Romania, as part of the EU’s efforts to replace the energy it used to receive from Russia.