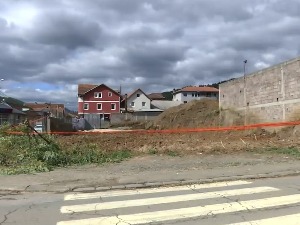 About the last works that the investors started on the site last week, the Novopazar Museum sent a letter to the Republican Institute for the Protection of Monuments, as well as to the Institute for the Protection of Monuments in Kraljevo. On the same day, Repulički issued a Decision on banning all construction inspections so that they would stop the works.

Estela Radonjić, from the Republic Institute for the Protection of Cultural Monuments, says that their “hands are tied”, the only thing they could do was issue a ban, which the investor ignored.

The City Building Inspection delivered the decision on the ban to the investor on Friday because, according to the procedure, it had to be determined which inspection is competent.

Decisions were made today on the prohibition of works, closing the construction site and returning it to its original state. The site was completely destroyed over the weekend.

Although it bears the name Latinska, the church was brightly painted, so it was established that it is a Serbian medieval church that has similarities with the churches in Deževa and Naprelje.

During partial excavations in 1982, 11 tombstones from the same period were found next to the church. The locality was destroyed years ago due to the construction of the road and the intervention of the plot owners.