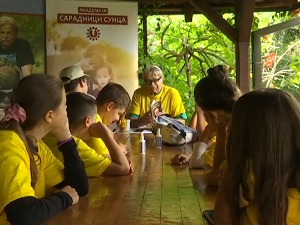 A terrible lion came to life on the porch of Ršum’s house, with children and a story about its creator – Duško Radović. It was he who left the title “Associate of the Sun” to writers who write in beautiful language, cleverly, wittily, briefly, clearly, clearly, but also to young people who, under the auspices of the poet’s Academy, acquire the conditions to become so.

“That association with the living and with those who are largely in eternity in their textbooks or readings, gives a special, in such a beautiful ambience, a special experience to these gifted children,” says the poet Ljubivoje Ršumović.

The children got acquainted with the poetry of Danojlić, Bećković, Crnjanski, Miljković and Walt Whitman, but also discovered secret literary skills.

“I tried to convey to them how important it is that they create something new every day and stick to it for the rest of their lives if they can and that whenever they go to bed at night they know that something was created that day, at least one verse,” explains children’s writer Uros. Petrovic.

The students of the Academy created songs, but also practiced how to present their verses to the audience in the best way.

“I realized what is most needed, and that is for children to get rid of anxiety and the feeling that a public performance is something terrible, a kind of specter,” said actress Borka Tomović.

There was time for new ecological knowledge, but also for sports activities and excursions.

“I think that one should experience all these experiences first of all in order to be able to explain how beautiful socializing is, how beautiful poetic freedom and expression is,” says Teodora Petrović from the “Sveti Sava” Elementary School in Bijeljina.

And her friend Andjela Dimitrijevic from the elementary school “Nikola Tesla” in Belgrade adds that she learned to “act” while reciting a song and to write and rhyme better.

“The verses tell us that life is beautiful so that the whole world floats on the wings of imagination,” pointed out Jovan Gogić from the First Primary School of King Peter the Second from Užice.

Things are not going well with the Government of Kosovo