Ahmeti inspects the works of QMF Veternik, the citizen calls him “criminal of the urban plan” 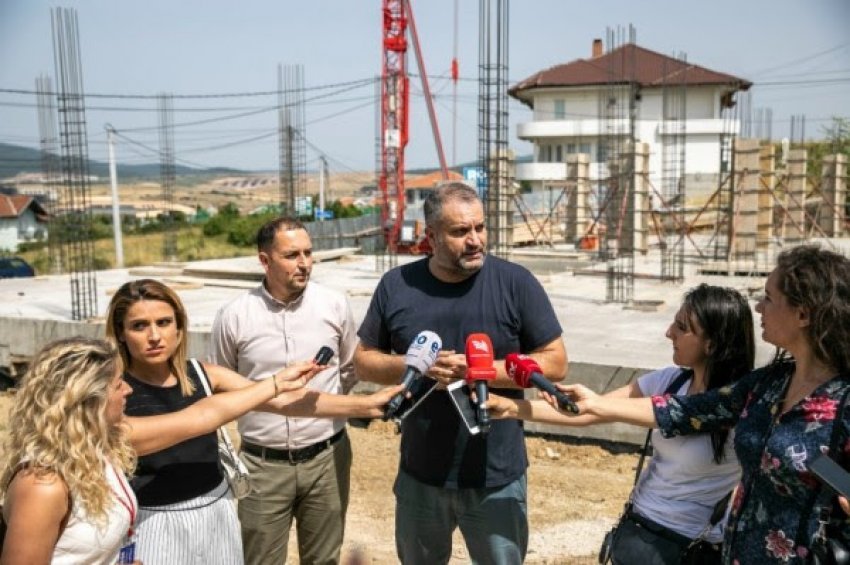 On Wednesday afternoon, the mayor of Prishtina, Shpend Ahmeti, accompanied by the director of Health, Bujar Gashi, inspected the works of the first Family Medicine Center in “Kujtim Laro” street of Veternik neighborhood. Although, the citizens of this area were not very happy to express their anger towards Ahmeti.

Ahmeti emphasized that with the construction of this FMC the needs of this area of ​​the capital are met who are obliged to receive medical services in the FMC in Calabria or Mat.

For Veternik QMF, the head of Prishtina said that he will meet all the requests of the citizens living in this area and that its complete completion is expected to happen at the end of this year.

Ahmeti: We complete the network of Family Medicine Centers

“This is the part of Prishtina which is not covered by the network of the Family Medicine Center, so most of them have either gone to Calabria or to the Family Medicine Center in Mat and now with this we will develop the new Prishtina on the side from ‘Qëndresa’ neighborhood and various neighborhoods that are being developed in this part of the city, this center is expected to be completed by the end of the year and will provide all the needs of a Family Medicine Center, including the laboratory and “We have said many times that in Prishtina this medical center is either not mentioned or is not forgotten, and I am glad that you were not often mentioned as a problem”, declared Ahmeti.

However, the construction of this Family Medicine Center has not been welcomed by some surrounding citizens who are already in litigation with the Municipality of Prishtina claiming that this center will make their lives difficult.

One of them, Reshat Sahitaj, called the mayor of Pristina a “criminal of urban plans” who is blocking the road leading to his house.

Sahitaj: Shpend Ahmeti is a criminal of urban plans

“This ambulance is a septic tank that will poison the citizens of Kosovo with the waste of the toilet that will go out on the streets, my neighbors and I have been in the context against this ambulance for two months. I am closing the roads. A neighbor whose road is closed, my road is also closed on the other side, the state opens the road, the state does not close the road.Then the ambulance does not meet the urban conditions because according to the laws the ambulance does not have 30% of the greenery, so “It is an ambulance which was built with the decision of Shpend Ahmeti, that for me Shpend Ahmeti is a criminal of urban plans in Prishtina because he destroyed the urban plan instead of building it”, said this citizen.

He thinks that the Municipality of Prishtina is not building the FMC on its land and that it is located 50 meters away from the place where this building of this primary health institution is being erected.

Sahitaj, who is also a writer who has raised this issue some time ago, said that the mayor of Pristina Shpend Ahmeti is building this center in the current place as a sign of revenge against him who has been critical.

Sahitaj: 50 meters further is the land of the Municipality of Prishtina

“50 meters further is the part of the municipality, 50 ares, 7 ares, 100 ares, there are as many as you want. He came here deliberately because on Kosovo televisions I have previously spoken against the injustices done to him by Shpend Ahmeti. My house is closed, the other one has not done the house yet but he has the land there, so the road to the two houses is closed. We are now in court on Friday the trial has started within this week or next week a decision will be made by the court whether it will continue to be built or will not continue to be built, which may be interrupted by the trial. These works have started for two months, the land belonged to the Municipality and this was not even land but it was a shore, for which I paid 20 thousand euros to make it flat “, continued Reshitaj.

However, the mayor of Prishtina, Shpend Ahmeti, says that they can not build on the properties that are in dispute and that the property where this FMC is being built belongs to the Municipality of Prishtina. According to him, this land has been chosen to be built as it is accessible to all residents.

Ahmeti: We can not build on properties that are in dispute

The Family Medicine Center in the western area in the Veternik neighborhood, is a project funded by the Municipality of Prishtina and has been ready since 2019. The project reaches the value of 463,318 euros. This center is planned to serve about 20 thousand residents of Veternik neighborhood, in which case it is intended to facilitate their access to health services.

During the inspections of the works was also present the director of Health in the Municipality of Prishtina, Bujar Gashi who among other things announced that from next week, Prishtina will start hormone tests such as: T3, T4, TSH, PSA . These tests will be performed at the Main Family Medicine Center.