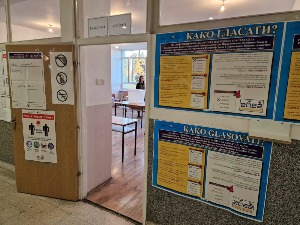 The polls are closing, the first unofficial results around 21.00

Polling stations in Bosnia and Herzegovina, with a few exceptions, were closed at 7 p.m., which officially ended the voting process in this year’s General Elections in BiH.

Now the counting of votes will follow, and the first unofficial results should be known around 9:00 p.m., while the Central Election Commission of Bosnia and Herzegovina will announce the preliminary results at a press conference at midnight, Klix reports.

Right to vote in the general elections 3,368,666 voters could use it. There were 72 political parties, 17 independent candidates and 38 coalitions on the ballots.

Members of the BiH Presidency are elected in two constituencies – in the Federation of BiH, where two members are elected, one from the Bosniak and one from the Croat people, and the Republika Srpska, which elects a Serbian member.

10 candidates, five each from both entities, ran for the Presidency of Bosnia and Herzegovina.

Borjana Krišto (HDZBiH) and Željko Komšić (DF), as well as Denis Bećirović (SDP), who also received the support of 10 opposition parties, Bakir Izetbegović (SDA) and Mirsad Hadžikadić from the Coalition for Progress ran for the Croat and Bosniak member.

Željka Cvijanović, Mirko Šarović, Vojin Mijatović, Nenad Nešić and Borislav Bijelić are in the running for the Serbian member.

31 candidates were registered for the presidency of Republika Srpska. According to polls, the current Serbian member of the BiH Presidency and the leader of the SNSD Milorad Dodik and Jelena Trivić from the Party of Democratic Progress (PDP) have the best chances of winning.

The Central Election Commission announced that more than 50,000 regular and part-time election administration staff were engaged in monitoring the election process.