Continuation of excellent relations with the brand new Italian authorities 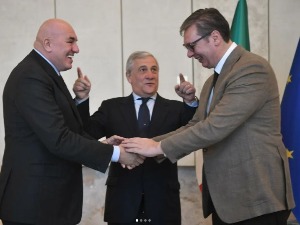 President Vučić announced on Instagram that he is grateful to Ministers Antonio Tajani and Guido Crosetti for their visit, because it is a big and important thing for Serbia.

“I am convinced that with the new Italian government we will continue the long tradition of good and friendly relations, because there is a lot of room for expanding and strengthening cooperation in numerous areas,” Vučić announced after the meeting.

Vučić pointed out that today Italy is one of the most important political and economic partners of our country, but also an influential factor on the international political scene, which with its positions and activities can additionally contribute to the development of a peaceful and stable environment in the Western Balkans as well.

“This is an extremely important visit for us, because Serbia wants to see an even greater role for Italy in the region,” the president pointed out and added that our country is particularly grateful not only for Italy’s consistent support for our European path, but also for its contribution to security. and stability in Kosovo and Metohija through the engagement of its army as part of KFOR, and especially the protection it provides to the Visoki Dečani monastery.

“Italy is very interested in the region of the Western Balkans”

As stated in the press release from the meeting, the president informed the interlocutors about the latest developments in the situation in Kosovo and Metohija caused by the constant unilateral provocations of the temporary self-government authorities in Pristina and emphasized that, despite such irresponsible behavior, Belgrade remains fully committed to dialogue, as evidenced by the demonstrated will for the continuation of the high-level dialogue, which was held on November 21 in Brussels with the mediation of the EU.

“Italy is here, Italy wants to be there, because we are very interested in the region of the Western Balkans,” said Minister Tajani, expressing his country’s willingness to help maintain peace and stability in the region.

The head of Italian diplomacy also pointed out the importance of peaceful resolution of all disputes and issues and said that Serbia will have the strong support of Italy in these efforts.

“This visit of two ministers is a political sign and shows how much importance Italy attaches to Serbia,” said Minister Crozetti and added that it is of the utmost importance for his country that there be peace in Kosovo and Metohija and that the Serbian community be respected and safe.

The interlocutors agreed that the extremely developed bilateral economic relations represent the driving force for further strengthening of comprehensive cooperation between the two countries, and that they should be further intensified at the highest level. The hope was expressed at the meeting that the Fourth Joint Session of the Governments of the two countries will soon be held, which will strengthen comprehensive cooperation, as well as the Business Forum of Serbian and Italian companies interested in stronger business ties.