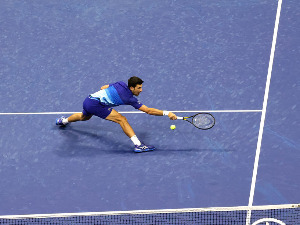 Novak is slowly raising his form after a full month break, and the real opponent for the fine “tuning” of the game was the 121st player on the ATP ranking list.

The world “number 1” was well prepared for an opponent he had never met before and he was the one who wondered on the field from the first minute.

He made the first break in the fourth game and took the lead 3: 1, only to take the service away from the rival once again by the end of the set and solve that part of the game in his favor in a round of half an hour.

In the second, he also made breaks twice, but he also suffered one, while in the third he did not allow Grikspur to endanger him and he triumphed after 100 minutes of tennis.

“A good match. I played better than in the first round. I am very satisfied with the game. I served well, I found a rhythm on the serve,” said Djokovic, who struggled with the initial kick at the beginning of the tournament.

He stated that his rival is an excellent server, which is why he had to return well.

“I made him play. I watched his first round match against Struff and saw that he was serving well. I knew that the key here would be for me to return. To make him play, to move. He doesn’t move very well. I changed the rhythm. I’m very happy with my level of tennis. Everything is going in the right direction. “

Djokovic is now expecting his first difficult exam in the tournament, as he secured a duel with former US Open finalist Kei Nishikori, who eliminated McKenzie McDonald in five sets after a great fight.