Epiphany cloud over Bursa, extra spectacular stay than in photos 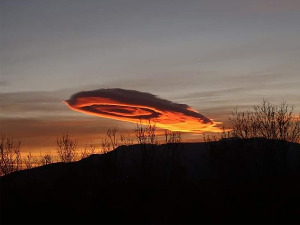 We got up before the early dawn, it was just beginning to dawn. On Epiphany. I rarely travel in groups, I haven’t done that for almost two decades, and now, with my in-laws, I accepted with a heavy heart that we travel through Turkey for five days through an agency.

As it happens, bus tours leave before dawn. We left the hotel sleepy, peering through the shutters, still unsure of where we were and where we were headed. The street lights went out and announced the official start of a new day.

On Tuesday, everyone in my group excitedly started clicking cameras at the bus parking lot. I was already thinking that the pretty girls must for some reason want a morning selfie with the bus in the sky, when I saw a cyclical cloud in the sky that looked like a dull red flying saucer that had just taken off, or, perhaps, was just planning to land in Turkey, nearby the old Ottoman capital of Bursa, where Bayazit the First, who defeated Prince Lazar in Kosovo, is also buried.

“Aren’t aliens landing?” was the logical question of a fellow passenger, while my wife, an Indonesian woman, knowing that I have traveled a lot and seen and learned on my travels, expected me to provide her relatives with a scientific explanation of this phenomenon.

Although the cloud caught my attention, I hadn’t seen one before, so I wasn’t too surprised – the human imagination can’t encompass clouds and all their displays.

As I like to look at the sky, and often fly in airplanes, I saw a large number of strange and unusual formations, so I immediately expressed my doubt about aliens and gave preference to rarer air currents. Of course, I didn’t miss the opportunity to take a selfie myself.

“Bursa is located at the foot of a mountain massif, which makes this phenomenon more likely,” I later read on the BBC, which reported the appearance of this cloud.

“Lenticular clouds, as this type of phenomenon is called, are formed in the troposphere, usually parallel to the direction of the wind. They are comparable to a lens or a saucer, and are formed when moist, stable air flows over a larger vortex, such as those caused by mountains, forming a series of large standing waves in the lee of the mountain.”

“When the temperature at the top of the wave drops below the dew point, then the moisture in the air can condense and form lenticular clouds,” says Wikipedia, where I quickly absorbed the knowledge, which I readily shared with my in-laws and group of fellow travelers, and garnered an admiration that only express-knowledge from Wikipedia can provide.

Looking at the pictures later in the media, I concluded that I was incredibly lucky to see this phenomenon live. In the pictures it looks like a cloud in the distance, while to us it seemed like we were really standing under a real flying saucer. The cloud moved and “breathed”.

“But I still think it’s aliens,” said an unbelieving Tom. As we look at the clouds, our imaginations run wild, what could it all be, and what life on earth would look like if an invasion from outer space really begins…

Do they also have a policy? Ego? Hate? Love? We drive and film the cloud, which gets brighter and brighter and slowly but surely disappears from the horizon along with our imaginations.