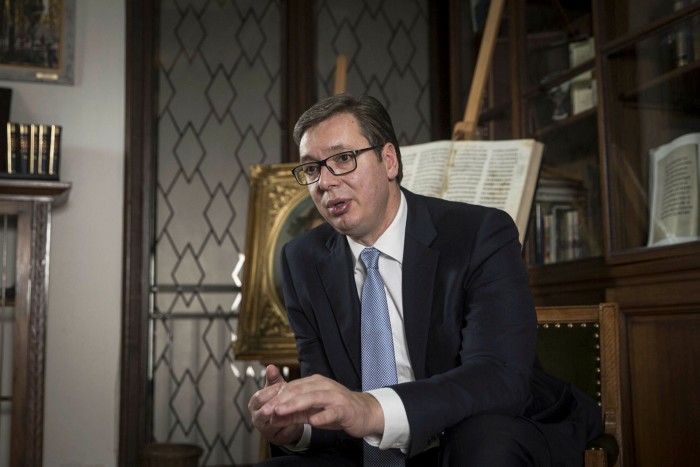 While its EU neighbors grapple over scarce Covid-19 vaccine supplies and struggle to get even the doses they have as a third wave of the virus intensifies, Serbia basks in the success of the highest per capita vaccination rate in mainland Europe.

The Balkan country of 7 million people has administered more than 2.1 million doses of the coronavirus vaccine.

Serbia’s nationalist President Aleksandar Vucic, however, fears that potential EU restrictions on vaccine exports, triggered by a severe supply shortage in the bloc, could jeopardize the program. Belgrade has so far relied heavily on China’s Sinopharm jab and Russia’s Sputnik V, but also uses BioNTech / Pfizer and Oxford / AstraZeneca vaccines imported from the EU.

“How can you do that? I think they won’t because that would be incredible, ”he told the Financial Times in an interview. “All in Serbia in [would] be angry. “

Serbia was the first country in Europe to use Sinopharm and has sourced hundreds of thousands of doses of Sputnik V from Russia, with which it has close ties. However, it expects a further shipment of nearly 450,000 Pfizer cans from EU factories in April.

Brussels has proposed discretionary bans on exports to third countries with higher vaccination rates than the EU or that offer vaccinations made in the EU for “vaccination tourists” or import vaccinations from the block, but not send any in return.

When the Pfizer shipment arrives and a million more doses of Sinopharm are expected next month, Vucic predicts 2.2 million, or 37 percent of the adult population, will be fully vaccinated by the end of April. “I’m going to vaccinate the whole nation,” he said.

However, skepticism and concern about AstraZeneca’s vaccination following suspension in some countries this month due to safety concerns has resulted in low take-up in some areas. Serbia’s web portal for vaccine appointments also allows foreigners to apply, and thousands from across the Balkans and elsewhere have flocked to Serbia to take excess doses for free.

While many European countries have struggled to vaccinate even their most vulnerable citizens, Serbia also began vaccinating asylum seekers in migrant camps on Friday and vaccinated 4,000 health workers in neighboring Bosnia and Herzegovina.

Vucic rejected criticism of “vaccine tourism”. “We deliver our vaccines to everyone for free,” he said. “We have to be helpful and supportive to everyone else because even if we are good with the vaccination process, it doesn’t mean we are fine and we are safe when the people in the region are not.”

The president has a firm grip on the country. His Serbian Progressive Party has a super majority in parliament following the boycott of the recent elections by the opposition. Critics accuse him of undermining media freedom and withdrawing democratic reforms. Last year, Freedom House, the democracy watchdog, criticized “years of increasing state authority, abuse of power and strongman tactics by Aleksandar Vucic”. 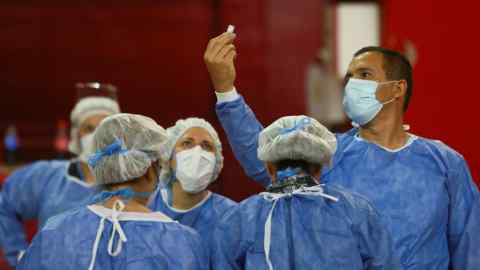 The government is aiming for EU membership, but has maintained close ties with China and Russia, both of which have a diplomatic advantage with their vaccines.

The balancing act has made the country the envy of its neighbors, who are frustrated with the slow introduction of Western products. Hungary became the first EU country to administer Sputnik V and Sinopharm after Prime Minister Viktor Orban said he had studied the Belgrade program.

Serbia plans to house two new vaccine factories to make it “completely independent of imports,” said Vucic. A plant for packing and distributing Sputnik V will be opened in May and will eventually be produced in Serbia. A Sinopharm factory built as a joint venture with China and the UAE will open in October and produce 24 million vaccines annually.

A study in the medical journal The Lancet last month found Sputnik V to be effective, but Vucic admitted he was “taking a political risk” by using Sinopharm’s headline-only push. He refused to disclose the price, but said Belgrade had agreed to share information from the vaccination program with Sinopharm.

Belgrade has close relations with Beijing. Chinese companies are building a railroad from the Serbian capital to Budapest and implementing other infrastructure and security projects, prompting the US Center for Strategic and International Studies to say last year that Serbia would become a Chinese “client state”.

The relationship deepened during the pandemic when Vucic kissed China’s flag when a shipment of medical supplies arrived from the country last year.

Vucic insists that he was under no pressure to introduce the Sinopharm vaccine. “I wasn’t blind as some people might say,” he said, adding that he personally reached out to Chinese President Xi Jinping late last summer to see if the shot could be bought.

But while many have questioned the lack of transparency surrounding the Sinopharm vaccine, even Vucic’s opponents are impressed with the vaccination’s introduction. The president “played roulette and won” with Sinopharm and Sputnik, said Vuk Jeremic, a former foreign minister who leads an opposition party, the FT.

To reassure the public, Vucic himself has announced that he will be vaccinated with the Chinese jab when new supplies arrive. He said he is watching progress in the United Arab Emirates, which has organized one of the fastest vaccination programs in the world and conducted phase 3 trials of Sinopharm’s vaccination.

After seeing UAE Vice President and Prime Minister Sheikh Mohammed bin Rashid al-Maktoum receive the vaccine in November, he said, “I knew everything was pretty much all right because [the Emiratis] everything under the microscope. ”

Video: Covid-19 and the vaccine business