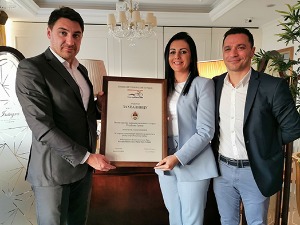 The meeting was also attended by Vladimir Kuvalja, director of the Cycling Association of Republika Srpska and director of the World Gran Fondo Championship, which will be held in East Sarajevo and Jahorina.

The current year in Republika Srpska and Serbia will be marked by cycling. It all starts in April with the traditional race “Belgrade – Banja Luka”.

Then, in June, the most famous cycling event in this area will be organized, the Race through Serbia, and the culmination of everything is the World Grand Fondo Championship which will be held in East Sarajevo and on the Olympic beauty Jahorina and the first Grand Fondo Serbia competition in September in Belgrade.

However, the crown of the entire work in cycling in the entire region will be the historic European Championship in mountain biking, which will be held from August 12 to 15 in Novi Sad, at the Petrovaradin Fortress.

“We owe great gratitude to the Minister of Family, Youth and Sports of the Republic of Srpska Sonja Davidović and the Minister of Youth and Sports of Serbia Vanja Udovicic. They give us really great support in organizing all major international events, but above all they help us develop sports and cycling in general. Without their help we would not have succeeded, and we have managed to push all the boundaries. “

“The cycling federations of Serbia and Republika Srpska have the best possible cooperation, just like our ministry, and that gives us the wind in our backs to continue with such good work,” said Secretary General of the Cycling Federation of Serbia Sasa Gajicic, who together with four-time Olympian Ivan Stević presented Minister Sonja Davidović with a special plaque and a letter of thanks for the development of sports and cycling.

The meeting was also attended by the director of the Gran Fondo World Championship in Republika Srpska, Vladimir Kuvalja. This project is also one of the most significant for our sport in 2021.

“We worked long and hard to win the World Cup, but nine months before the competition due to technical problems in Banja Luka we had to change the venue of the competition and look for a new host. It could only be East Sarajevo and Jahorina with their accommodation capacities. 9,000 people are coming there, out of three 3,000 participants. They called us from Australia, only 108 participants are coming from that part of the world. “

“We have excellent support from the institutions of Republika Srpska and Serbia, they put all their resources in the service of our organization. In a few days we will visit the new track, although we have already prepared and presented this one in Banja Luka. We are working on everything, support comes from the Ministry of Family, Youth and Sports and we are very grateful for that – said the director of the World Cup, Vladimir Kuvalja.

The ministry says that the “Belgrade – Banja Luka” race is an event of exceptional importance that needs to be nurtured, but also that cycling is getting stronger in the back in this area. The organization of the World Cup is the crown of hard work of previous years, even decades.

“We discussed the plans for this year, the race and the World Championship are a priority. We will give all our resources to make everything go smoothly. We must base all further activities on our good cooperation in order to achieve good results together,” said the Deputy Minister. Mario Đuran.

The meeting was also attended by the delegation of the BS of Serbia, led by the Secretary General Sasa Gajicic, and the four-time Olympian Ivan Stevic, who is also the sports director of the World Championship. He is very proud to be part of the team that should realize the historic year for Serbian cycling.

“Serbia won the European Championship in mountain biking, Republika Srpska is organizing the World Championship in the Grand Fund, those are great things. It will be difficult to repeat a year like this. Serious work is ahead of us. I can’t wait for a new track in East Sarajevo to provide all cyclists with unforgettable “I know that terrain and I am glad that we will show that beauty to the whole world. I hope that we will have the opportunity to welcome the audience on the streets,” Stevic said.

He added that Slovenia, as a world superpower, is an example and role model for everyone in the region, and that creating a top cyclist is a process that takes years, because everyone wants one Serbian cyclist to ride the biggest races like Tour de France, Vuelta or Giro d’Italia in the future. .

“Everything requires a process, we have started with popularization. This is an ideal chance to start a tradition in order to follow the footsteps of Slovenia,” Stevic said.