Greater than 50 in hospital after an ammonia wagon overturned close to Pirot, faculties and kindergartens are closed 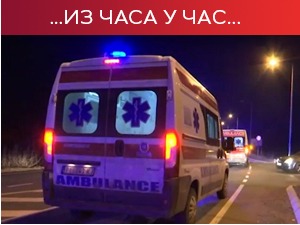 14 patients were admitted to the University Hospital Nis

In addition, one child was admitted directly to the Children’s Internal Clinic after being treated at the hospital in Pirot, so that a total of 14 patients were admitted to the entire University Hospital Nis.

Traffic diversion from the highway near Pirot and Bela Palanka

Traffic from the highway is being diverted as follows:

– vehicles coming from the direction of Niš use the exit on the Pirot East junction,

– vehicles coming from the direction of the Gradina border crossing use the Bela Palanka turn-off, and are still directed to the alternative route Bela Palanka – Pirot, via Ponor.

Fifty-one people were hospitalized in the Pirot hospital due to symptoms of ammonia poisoning. Another eight housed in the University Hospital Nis. An appeal was sent to the locals not to go outside. One person died in the hospital in Pirot, but there is no confirmation that the cause of death was ammonia poisoning.

The water supply of Niš is not threatened, the city administration announced. For preventive reasons, the water factory in Niš was turned off, as well as the pouring of water from the source of Medijana.