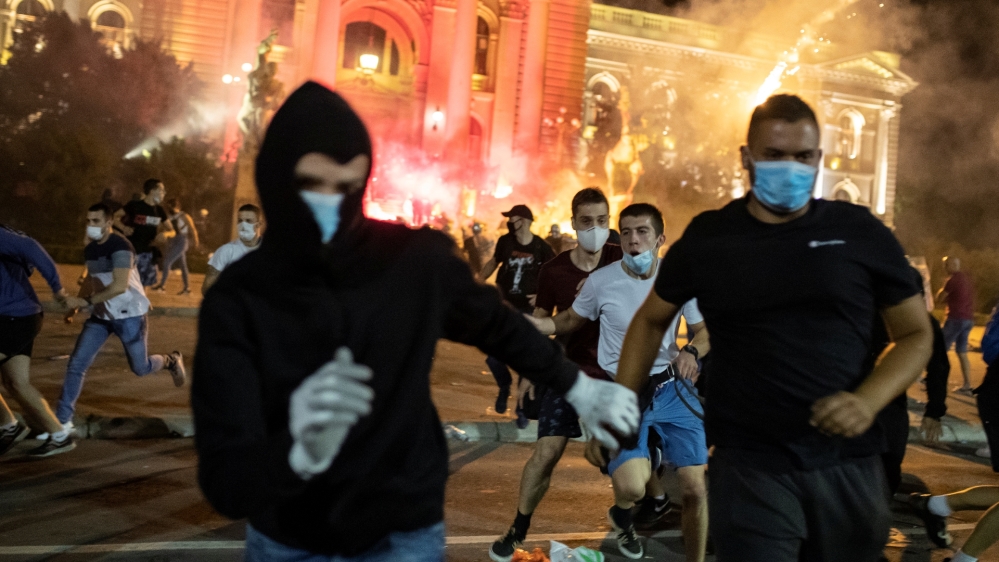 Police fire tear gas as thousands of anti-government protesters gather in Belgrade for a fourth night.

Thousands of Serbs protested on Friday for the fourth time in a row against President Aleksander Vucic and his government’s handling of the coronavirus pandemic.

Protesters opposing a ban on mass gatherings despite an increase in virus infections attempted to storm the Serbian parliament in central Belgrade by throwing bottles, stones and torches at the police who were guarding the domed building and removing its metal fences.

The police first used their shields to push the protesters back and prevent them from entering the building.

But after repeated attacks, they fired tear gas to disperse the crowd and then fought battles with protesters.

Several people were arrested and many reporters injured, mainly in attacks by demonstrators.

Protesters in front of the parliament building in Belgrade, Serbia, July 10, 2020 [Marko Djurica/Reuters]

This week’s demonstrations were initially fueled by frustration over economically stifling measures to contain the pandemic, but soon turned into anti-government rallies with attendees calling for Vucic to resign.

Earlier on Friday, Vucic said he was not worried about losing political power amid protests seen as the most intense since the overthrow of former Serbian strongman Slobodan Milosevic in 2000. Instead, he expressed fear that the protesters would spread the virus.

“It is so irresponsible to call on people to gather and demonstrate when we are faced with the most terrible number of coronavirus infections,” Vucic told reporters during a state visit to France.

“I ask people, please, let’s protect our health. Nobody will take power by force. Power is taken over in the elections. You can protest as much as you want when the epidemic is over, ”he said.

She said “hospitals are full of sick” and urged people to “respect the measures in place” to limit the spread of the virus.

Critics say the government’s decisions to allow the resumption of soccer matches, religious festivals, parties and private gatherings in May and the general election on June 21 are responsible for the renewed surge in infections. Vucic’s Serbian Progressive Party (SNS) largely won the vote.

During his nearly three-year tenure, Vucic has cemented tremendous power in the presidency, a role that was previously only ceremonial.

The riots on Friday came after a peaceful protest on Thursday – although there was also violence earlier this week.

The protests began on Tuesday when the president announced that Belgrade would be placed under a new three-day lockdown after a second wave of confirmed coronavirus infections.

They carried on despite Vucic’s suspension of plans to enforce the lockdown. Instead, his government has banned gatherings of more than 10 people in the capital.

Serbian officials denounced the protests as an attempt to overthrow the government and weaken Vucic’s position in the European Union-mediated negotiations over Kosovo, a former province whose 2008 declaration of independence Belgrade does not recognize.

Municipality of Prishtina is announced: Road maintenance is being uninterrupted, we have engaged 9 operators