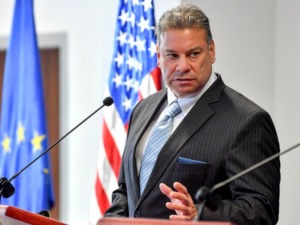 In an interview with Tanjug, Gabriel Escobar called on both parties to show maximum flexibility and reach an agreement in the coming days, and on the eve of the November 21 deadline, after which the Pristina authorities announced that they would punish the owners of vehicles with Serbian plates who did not re-register the plates, in order to calmed down the situation.

“Then the parties should redouble their obligations towards dialogue, including the implementation of already signed agreements, which means the beginning of negotiations on the establishment of the Community of Serbian Municipalities,” said Eskobar.

When asked how he sees the solution to the overall situation in the north of Kosovo and Metohija, whether he believes that a compromise can be reached, given that the request of the Serbian List, which withdrew from all Kosovo institutions, was to respect the Brussels Agreement, primarily the formation of the Community of Serbian Municipalities, Eskobar says that The US agrees with the European Union that recent events are worrying.

“The withdrawal of Kosovo Serbs from Kosovo institutions is not a solution to the current disputes and has the potential to further escalate tensions on the ground. All parties must take steps to reduce tensions and ensure peace and stability. Actions and rhetoric that increase the possibility of violence put innocent lives and the lives of international peacekeepers on the ground,” says Escobar.

When it comes to establishing the Association of Serbian Municipalities, Eskobar says:

“The Assembly of Kosovo ratified the Brussels Agreement, and the Constitutional Court decided that it is necessary to establish the ZSO, which makes the formation a binding legal obligation for Kosovo”.

When asked if there are US diplomatic activities in this matter, Escobar states that there is “a full partnership with colleagues from the EU”.

“We are fully engaged through the activities of Quinta. Since European integration is an aspiration of both countries, this process should of course be led by the EU. The United States is closely engaged with the EU, both parties and European partners in full support of this process. Politically, financially, through capacity building, and through every other mechanism we have to ensure the final result creates long-term stability for the region. The United States has been actively engaged in supporting the EU’s efforts to manage the current situation,” said Escobar.

When asked about the Franco-German proposal for the solution of the Kosovo issue, Escobar says that the details of the proposal are being discussed in the context of the EU dialogue.

“We strongly support it. I assume that after the talks between the two governments, greater engagement with the public will begin,” says Escobar.

He adds that progress towards the normalization of relations between Belgrade and Pristina through EU-mediated dialogue is still very important for regional and European stability during the war in Ukraine.

When asked if he plans to come to Belgrade and Pristina soon, Escobar says that he has no planned trips at the moment.