If we do not burn tires, landfills and fields – we can have cleaner air 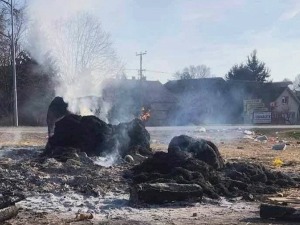 In Germany, after two years, fireworks were allowed again, for which the Germans spent 100 million euros.

“Just in that one night, more than two thousand tons of tiny dirty particles went into the air over Germany in a few hours. Into the air, and then into our lungs,” says Ivan Đerković, RTS correspondent from Germany.

In Serbia, in addition to celebrating with fireworks, firecrackers and bursts from weapons, they went one step further. In Novi Sad, for example, Christmas was celebrated with the burning of tractor and car tires.

Assistant professor at the Faculty of Chemistry of the University of Belgrade, Dr. Konstantin Ilijević, states that these fires produce all the polluting substances that we normally emit when fossil fuels are burned.

“What is the problem here is that they are produced in many times greater quantities and concentrations, and that is why burning tires is particularly dangerous.” It is illegal for you to take one tire and throw it at the landfill, but to burn it is not only illegal, it goes against common sense,” Ilijević pointed out.

Bojan Simišić from “Eko straža” says that they receive various recordings from the field, which are then published on social networks.

“However, this year we had a very negative reaction to the fact that people from those villages came forward and joined us in debates and polemics. “They have a very strong resistance to accepting the information that it is something that is not healthy and creates a general danger,” said Simišić.

There is more and more evidence based on air quality monitoring and health statistics, how toxic particles from the air, especially when burning tires, plastics and other hazardous waste, affect health.

Former director of the WHO European Center for the Environment in Bonn, prim. Dr. Elizabet Paunović states that the smallest particles – 2.5 microns in diameter – are the most dangerous precisely because they pass from the lungs into the blood.

It is for this reason, he says, that at the level of the United Nations, the goal of significantly reducing mortality from polluted air by 2030 was agreed upon.

In order to solve the problem of air pollution from thermal power plants, industry, combustion plants and traffic, large investments and time are needed. If there were no burning of landfills, crop residues on the fields, cables to extract copper and tires – we would definitely have cleaner air, and it only takes awareness.