Localized hearth within the previous glassworks in Pancevo, the railway stopped the transport of harmful items 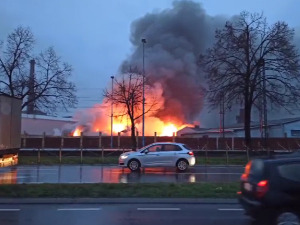 The old wooden barracks of the former glassworks caught fire, in which, according to the words of the director of the company, Goran Kojić, there were no dangerous substances.

Firefighters responded in a timely manner, managed to localize the fire and are currently working on the incident.

No one was injured in the fire.

The mayor of Pancevo, Aleksandar Stevanović, told RTS that the mobile team of the Institute of Public Health for air quality control went out on the field and will determine whether there was any danger to the environment.

Road traffic was not interrupted, while the railway stopped the transport of dangerous goods by the railway that passes by the burning warehouse.

Antonela is missing in the studio, Mevlani is affected