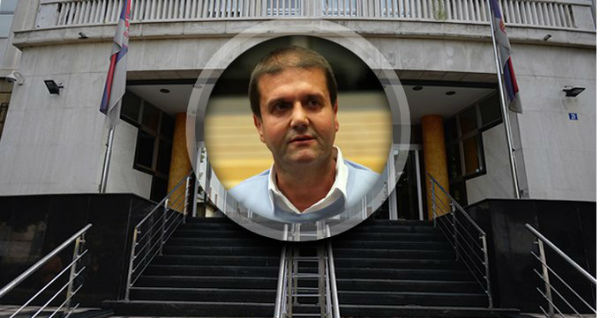 KALINIC TRIED TO KILL SARIC IN PRISON: He attacked him after his arrest?

After seven years spent behind bars, Darko Šarić was released under house arrest with a nanogic! The decision was made by the Court of Appeals in Belgrade on Friday, after which Pljevljak was thrown into the house of his wife Lana Popović.

Let us remind you that he could have been killed in prison soon after his arrest. Namely, the former member of the “Zemun clan” Sretko Kalinic (40), also known by the nicknames Zver and Kasapin, tried to attack Darko Saric (44) in detention in the Special Court building in December 2014. The bigger incident was prevented by the prison guards at the time, but on the same day, Kalinic was urgently transferred from the Belgrade detention center to the Zabela prison in Pozarevac.

– Both were placed in a special department of the detention unit in Ustanička Street. The incident happened when they met by chance while taking a walk. Kalinic tried to attack Saric, and since he is known as a cruel murderer, the question is what would have happened if the guards had not reacted quickly and prevented a bigger incident – said a source in Kurir and explained that the guards are always on alert when it comes to the infamous “dugout”. “.

– Kalinic has proven several times in detention that he is ready for anything. He tried to escape from detention in the Central Prison, and he shot Sreten Jocic, better known as Joca Amsterdam, with a tile that he threw off his bathroom in the cell while the guards were escorting him. In 2013, a razor and a rope were found in his cell

– was born in 1974 in Zadar, was a member of the infamous “Zemun clan” – was arrested in Zagreb and extradited to Serbia in 2010 for participating in the murder of Zoran Djindjic and numerous other crimes was sentenced to 40 years in prison – for attempting to escape from prison is in prison for a year and a half – he is on trial on suspicion of committing several murders as a member of Luka Bojović’s group

He was urgently “evicted” from Belgrade

– Kalinic was transported to Pozarevac immediately after the attempted attack on Saric, within just an hour, with huge security measures and in the greatest secrecy. He was placed in the seventh pavilion of this prison – the interlocutor said.

The interlocutor could not say why Kalinic wanted to settle accounts with Saric.

– The two of them did not share a cell, nor did they have the opportunity to meet in custody. This is strictly taken into account. The misunderstanding probably dates back to the period when they were both at large – he explains.

On February 7, 2012, at 5.30, Kalinic cut the bars of the cell with a bonsek. In the room on the first floor, he overcame the prison guard, broke the bars on the window and jumped out into the yard. He was caught in the yard by members of the Gendarmerie and returned to his cell

While these detainees were on the run, the media speculated that Kalinic was working for Saric, who denied this in June 2010 in a letter sent to several addresses.

– Presenting me as the person who ordered various murders and connecting with Luka Bojović, Cvetko Simić, Sretko Kalinić and the “Zemun clan” are orthodox lies – Šarić wrote before he was in custody.

He also mentioned the name of Sretko Kalinic during his first appearance before the court.

– I remember when Kalinic was arrested. I wake up in the morning, turn on the TV and hear, “all this was ordered by Darko Šarić.” I felt like an actor in American movies, when everything is set up for the main character, and he runs all the time and proves that it is not true – said Šarić –

Who is Darko Saric

– he was born in 1970 in Pljevlja – a warrant was issued for him in 2010 – on March 18 this year I surrendered to the Serbian judiciary – he is on trial for smuggling 5.7 tons of cocaine and laundering more than 22 million euros

Sretko Kalinic is accused of killing Milan Jurisic in Madrid in 2009, after a Spanish court acquitted Luka Bojovic of that crime. According to the verdict that Kurir had access to, Kalinic and Milos Simovic also testified before the court about Jurisic’s murder. Kalinic stated that the crime was committed by Luka Bojovic, while Simovic accused Kalinic of killing Jurisic.

– Simović’s statement was much more convincing and the court in Spain does not need further verification of its veracity – it is stated in the verdict by which Bojović was released.