Protest in front of the Ministry of Education, due to sexual abuse of a minor in Pristina 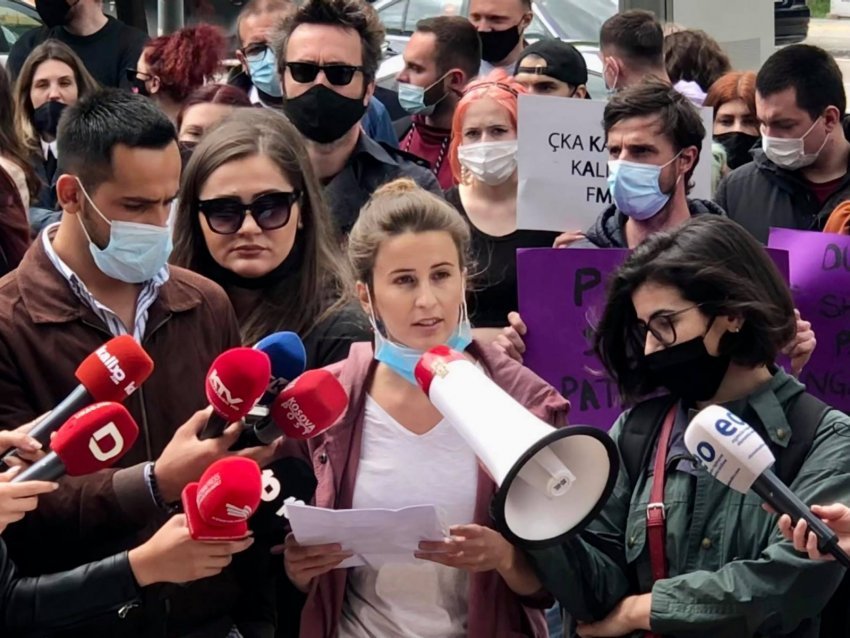 The Feminist Thought and Action Collective has protested in front of the Ministry of Education, Science, Technology and Innovation regarding the case in the “Faik Konica” school.

Fjolla Muçaj, organizer said that the last key to happen in the school ‘Faik Konica’, has shown once again the scary reality with which girls grow up in Kosovo.

According to her, the sexual abuse of girls in schools is an urgent issue that we must all deal with.

“The last case that happened in the school ‘Faik Konica’, has shown once again the scary reality with which girls grow up in Kosovo. “And this reality, where the risk of sexual abuse is constant, comes precisely because of the social and institutional failure to treat violence against girls and women as a serious problem and concern for public safety.”

“Institutionalized patriarchy is endangering the right to education and healthy growth of children in schools. This is because our institutions have consistently failed to come up with genuine policies that would seriously address the sexual violence against girls, not recognizing at all the presence of this phenomenon and the need to address it. On the other hand, we are deeply concerned with the media reporting of these cases and consider that part of the problem is the media themselves and their scandalous reporting. “The media are becoming a serious obstacle in combating these phenomena, treating issues of gender-based violence as ‘sensational’ news and the means by which they earn more, violating above all human and journalistic principles.”

“Disclosure of the identity of the victims and children involved in these cases, such as the latter, is intolerable, for which we demand penalties from the relevant authorities. “We know very well that the cases made in the media within the school garrison are not isolated cases, but a phenomenon which is on a frightening scale present in all our private and public environments.”

“Therefore and as such should be treated. Our system and all institutions, from the family to public institutions are producing sexual harassment and abuse. This is being done through patriarchal education, stratifying and feeding inequalities and neglecting acute issues such as sexual violence against girls and women. Sexual abuse of girls in schools is an urgent issue that we all need to address. However, the Ministry of Education should get the most. This phenomenon must be fought on several levels and involves many parties, starting from an awareness of the family, schools, media and society, which should and can be done only by the state.

She also presented their requests, which were: Introduction of sex education in schools; Safe facilities for female students and Employment of social workers and psychologists in all schools.

“Therefore, today we want to turn our attention to the ministry and let them know once again that this institutional neglect must end and that the life and safety of girls in schools is in danger and as such should be addressed through genuine gender rights policies. Therefore, our requirements are clear: 1. Introduction of sex education in schools; 2. Safe environment for students; 3. Employment of social workers and psychologists in all schools. We will not stop until these three requirements are met. “Until girls and women live free from any kind of violence and control, wherever they are.”

While the Kosovo Police reacted after the publication of a video on several portals, according to which it is alleged that there was a case of sexual abuse between students in the yard of a school in the capital.

The notification of the Police states that from the school officials the Police has received a sensitive information, which has been treated in coordination with the school leaders, the officials of the Center for Work and Social Welfare and the State Prosecutor.