Residents of “Muharrem Fejza” street are protesting, a lawsuit against the Municipality is announced 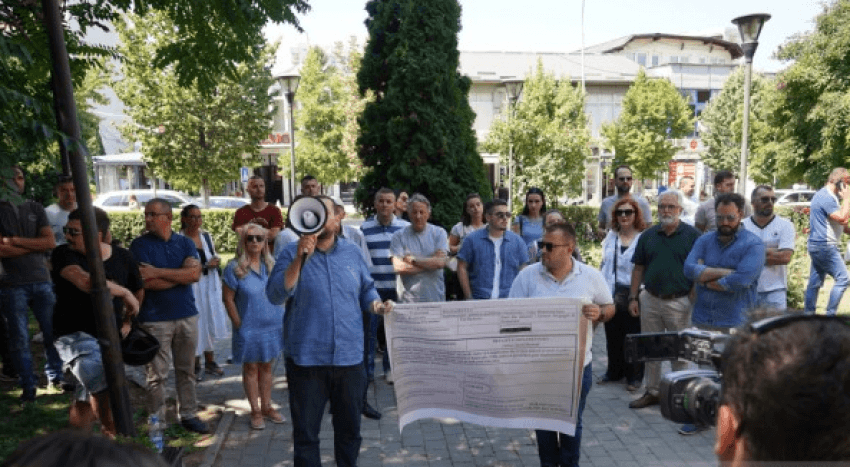 The delay of the works in the street “Muharrem Fejza” in Prishtina has made the residents to protest in front of the Municipality of Prishtina to express their dissatisfaction that they are facing as a result of not completing the works there.

The organizer of the protest, Dren Shahini has criticized the municipality for not managing and coordinating the works, while emphasizing that they are endangered every day, things have to walk on the cables that have been placed on the streets and on the holes that have been opened by the contractors.

“There is no coordination or supervision. We express revolt and indignation because we have seen your projects both in ‘Peyton’ and in the street of ‘Llap’ as they have lasted. We know and we are convinced and after two months we will have to wait again. Do you know how you left the underground cables, and that they are a danger to us. if a cable needs to be replaced then it will have to be completely open to the road, and all of these would have to be part of your management plan and not us coming and reminding you. You have been waiting to come for a walk with us and see what is created there, the acoustic noise created by the works. Did you know that all the works that are taking place are without a minimum of safety, I have to walk on cables and holes that open to the contractor to go to the other side of the road because somewhere I have to walk, to go to the apartment, we also have to live and live there daily, and not only when the road ends. We are the neighborhood that contributes to its own budget “, said Shahini.

After the end of hinahin’s speech, the director of Infrastructure for the Municipality of Prishtina, Gëzim Mehmeti, appeared in front of the protesters and received them later in a meeting.

Surgeons Cash In on Stakes in Private Medical Device Companies