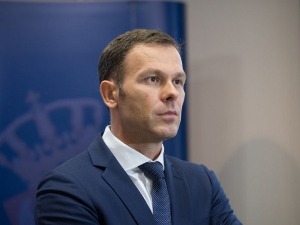 Siniša Mali, as a guest on Happy TV, pointed out that the President of Serbia, Aleksandar Vučić, initiated the entire mechanism for re-employment of workers from “Geox”.

He points out that the state also attracts capital-intensive projects, research and development centers …

“It is a strategy for the development of economic policy. We want to raise the average salary and raise it. They did not believe President Vučić when he said that it would be 500 euros in 2019, and we exceeded that figure a long time ago. The average salary in May was over 65,000 dinars.” “, stated Mali.

Mali said that in the first seven months of this year, two billion and 72 million euros of foreign direct investments were realized, which is an increase of 30% compared to last year.

He also referred to the increase in the minimum price of labor in Serbia and noted that the state’s position is to increase it despite the pandemic and economic crisis.

He points out that the strategy is for young people not to leave, to give them the opportunity for employment, but also a salary close to the salary abroad.

“The budget for ecology is three times higher than last year”

Minister Mali also spoke about the protection of the environment and reminded that the budget for ecology has been increased three times this year compared to last year.

“Last week, the government signed a contract for the construction of a sewage network, a wastewater treatment plant in 16 local governments with a Chinese partner. A factory that converts waste into energy will be completed in Vinca in a year. The largest landfill is being cleaned, a long process. but we are also aware that this is the biggest black environmental point in this part of Europe. That is why we set out to solve that problem, because it is a systemic solution, “said Mali.

He reminded that the payment of aid within the third package continues, as well as that additional money has been set aside for citizens.

“The full minimum salary in the field of catering and tourism will follow on August 16, while pensioners will be paid 50 euros in September. In November, 30 euros will follow, and in December another 20 euros will help all adult citizens. In total, that means they will receive 80 euros.” all adult citizens, and considering that pensioners receive an additional 50 euros in September, that makes a total of 130 euros for the oldest this year. It is a huge help that is paid directly from the budget, “Mali explained.

He points out that this in no way endangers the public debt, which is currently 56.2 percent in relation to GDP – significantly less than the 60 percent prescribed by the Maastricht agreement.

Residents of “Muharrem Fejza” street are protesting, a lawsuit against the Municipality is announced