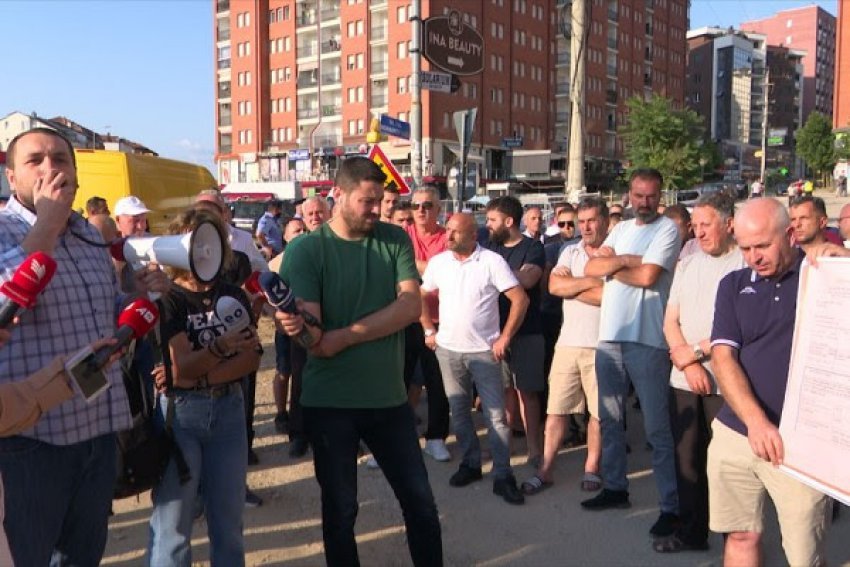 Residents of “Muharrem Fejza” street in Pristina, on Thursday afternoon have protested about the infrastructural situation in their neighborhood, as a result of the works for four months now. By blocking the main road for a few minutes, the residents of this neighborhood demanded the intensification of works, otherwise they announced larger protests in front of the building of the Municipality of Prishtina.

Residents’ representative, Dren Shahini, while listing the complaints in this neighborhood, said that they feel neglected by the municipality.

He said that now their neighborhood has turned into a horror for a living and worse, according to him they are not informed what date these works are completed.

Shahini: It is unbearable dust on hot days and unbearable clay on rainy days

“The dust is unbearable on hot days and the clay is unbearable on rainy days. With the recent rains, not because of the intensity but because of the works back businesses have been badly damaged, many basements have been flooded, many buildings and garages on the ground floor. It is not at all dignified that no authority at least from the municipality has been to visit these damaged businesses. For four months we have been turning into circus acrobats trying to find stones and whatever it takes to get past the past. For four months now, people with special needs have been locked in their homes because they have no way out and no one can walk or move. Nowadays, almost every day, a car is damaged due to open wells and because the alternative roads we use are not maintained. This treatment that is being done to us is unignified … Our essential requirements are these: Intensification of works even in the evening, even in three shifts, whatever the municipality must respond to this request, the works must be unstoppable, not on time official 4-8 but to work all the time because we do not dare to enter the winter season with this tempo approach “, he said.

Other protesting residents also criticized the government of Pristina Mayor Shpend Ahmeti, saying that living in this neighborhood has become difficult as a result of its poor management.

Sword: Here you are like living in Kabul, I do not know what that mayor did

“It happened to me personally with a neighbor with a small child, it was an emergency and I remained in the column. The child has not even been a year old and I have never felt like I was a child… even if the other person is elderly, he has the right to receive the necessary services. Here you are like living in Kabul, how much tax we pay… and in the end, for a year, the sewage is coming out there. There is nothing more shameful, I do not know what that mayor is doing. In my opinion, he is the worst management that the history of Prishtina knows “said the resident Alfred Shpata.

Sheriff: I call Prishtina the capital with this situation

“It has made our life very difficult. I am a compatriot. I have the freshest case on Monday with my mother, I’m five sick, I wanted to hold it in my hands… I was born here with potholes when it was without asphalt, but still after 49 years with potholes. With this poor management and has been said to be the capital of Kosovo. I did not call it the capital because I am coming to say that I am from Prishtina with this situation like this, dust catastrophic road, we come from there and I have to invest in cars in the pits of Prishtina, this is taken “said the other resident Zenel Sherifi.

Whereas, Dren Shahini, warned of new protests in front of the municipality in case their demands for intensification of works are not realized within a week.

Shahini: I will be in front of the municipal assembly

“I promise you that together with you we will not extend the protest for more than a week, if we do not see intensification of works let the municipality do what it wants, let it ask for help from the Ministry of Infrastructure, intensification of works otherwise this is the last time that we protest in the neighborhood we do not block with ourselves. I will be in front of the municipal assembly and together with us we will take the dust, fecal water and mud, we will take it with us and we will leave it before the entrance of the municipality of Prishtina, let them also experience what it means to live in dust every day “, mud and the smell of fecal water,” he said.

Protesters criticized Mayor Shpend Ahmeti for not visiting the neighborhood, saying it had only been once in eight years of his term.

KHN’s ‘What the Health?’: Delta Changes the Covid Conversation