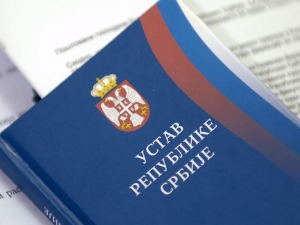 The President of the Venice Commission, Gianni Buquicchio, told Prime Minister Brnabic that the opinion of the rapporteurs at the next session of the Commission would be very favorable for Serbia and that he was convinced that it would be adopted as such, the Government of Serbia announced.

Prime Minister Brnabić thanked the Commission for its support to Serbia in finding the best solutions regarding the constitutional amendments since 2018, emphasizing that the process was very transparent and open, thanks, among other things, to public hearings that were organized on several occasions. Thanks to that, today we have the application of the best European practice, Brnabić added.

According to her, Serbia is completely open to further suggestions regarding ways to make the judiciary and judiciary as efficient as possible.

When it comes to the referendum on constitutional changes, Brnabić pointed out that its holding is expected immediately after the adoption of the amendment.

The Minister of Justice, Maja Popović, reminded that the work on constitutional changes is the first activity in the revised Action Plan for negotiations on Chapter 23 – Judiciary and Fundamental Rights in the process of negotiations on the membership of the Republic of Serbia in the European Union.

She pointed out that the goal of the public debates was to hear the opinions of the professional, scientific and wider interested public on the directions of changing the Constitution.

The Minister of Justice reiterated that Serbia remains open to all comments that would improve the quality of the existing text, because, she emphasized, it is mature enough to change the Constitution in the part on justice.

Popovic concluded that there is a great awareness that this time the changes must be successfully completed, because it is in the best interest of the citizens of Serbia.

The family listens to the Kosovar of “Për’puthen”, after offending the girls

Ahmeti: We do not allow gatherings inside schools