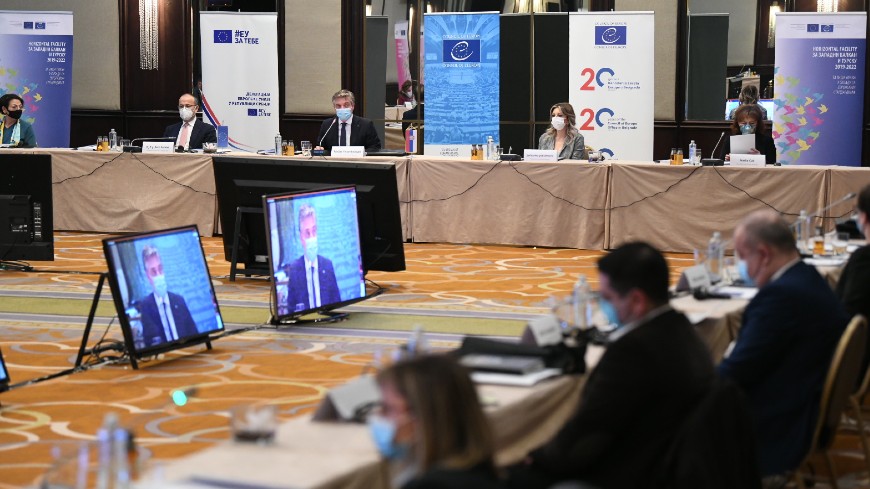 The protection of human rights, a democratic and inclusive society, guaranteed media and freedom of speech and an independent and strong judicial system must remain priorities of the Serbian authorities and their partners despite the challenging environment caused by the COVID-19 pandemic. Thanks to the continued efforts of the Serbian authorities to align with European standards and the substantial support of their partners – the European Union and the Council of Europe – the second phase of the “Horizontal Facility for the Western Balkans and Turkey 2019-2022” program will continue Problems in these areas as they adapt to current epidemiological circumstances. This has been underlined in today’s times second meeting of the beneficiary’s steering committee of the joint EU / CoE program.

Tobias Flessenkemper, Head of the Council of Europe office in Belgrade underlined an important role played by all beneficiary institutions, partners and civil society actors in the implementation of the program. “I would like to thank the Serbian authorities and the European Union for the excellent cooperation that has developed over the years. The Council of Europe office in Belgrade is celebrating its 20th anniversary this year. Thanks to the strong partnerships that have been built over the past two decades, we have continued to deliver tangible results despite the difficult environment over the past year, ”he concluded.

Jadranka Joksimović, Minister for European Integration of Serbiasaid that the reform of the rule of law is one of the most important issues for Serbia and its citizens. “The support program of the Council of Europe and the European Union provides the necessary expertise for reforming the judiciary and the rule of law, for combating trafficking in human beings and discrimination and protecting vulnerable groups, and for high standards when it comes to freedom of the media and freedom of speech Our European partners are striving for the common goal, namely the EU membership of Serbia as a democratic, sustainably developed and efficient state “, emphasized Joksimović.

Ambassador Sem Fabrizi, Head of the European Union Delegation to Serbia agreed that strengthening the rule of law and human rights is a priority for ensuring a better life for the citizens of Serbia. “The EU works with all relevant Serbian interest groups and international partners. Cooperation with the Council of Europe is extremely important, especially under the Horizontal Facility, to help develop better legislation, train more law enforcement officers, prosecutors and judges and ensure better protection for crime victims, ”said Ambassador Fabrizi.

Pilar Morales, Head of Programs in the Office of the Directorate General for Programs of the Council of Europe reaffirmed the commitment of the Council of Europe together with the European Union to continue to support Serbia in its reform processes. “The flexibility of the Horizontal Facility allowed for concrete adaptation measures while respecting its main objective: helping the authorities to ensure better protection of the rights of Serbian citizens in line with European standards, especially in difficult times,” she concluded.

Gordana Čomić, Minister for Human and Minority Rights and Social Dialogue of Serbia Today more than ever, people need the ideas that laid the foundation for the Council of Europe. “Peace among people, dialogue, human rights and new solidarity are the only things that will lead us out of this global pandemic with more compassion and humanity and less injustice and inequality. We owe it to future generations, “she concluded.

“The Ministry of Justice has made significant progress on the reform agenda of the Republic of Serbia and has shown that the joint support of the Council of Europe and the European Union throughout the” Horizontal Facility “program in recent times is undeniably important on our way to full membership in the EU” said Jelena Deretić, Deputy Minister of Justice of SerbiaThis underlines some of the programme’s objectives in the area of ​​justice. “The EU / Council of Europe program addresses the deficiencies of the judiciary in Serbia in terms of ethics and integrity, undoubtedly provides support in strengthening the rule of law and creates a solid basis for further improvement of the Serbian legal framework,” concluded Popović.

The joint program “Horizontal Facility II” of the European Union and the Council of Europe was set up as a cooperation initiative to help beneficiaries in the Western Balkans and Turkey to comply with European standards.

Despite the impact of the COVID-19 pandemic on the implementation of the activities, remarkable results were achieved in the second year of implementation.

In the area of Strengthen the independence and accountability of the judiciaryImportant work has been done to prevent undue influence on individual judges and the judiciary as a whole. Given that the use of digital space has increased significantly during the pandemic, the program has also initiated the development of guidelines for the ethical use of social networks for judges and prosecutors. The process of enforcement of judgments of the European Court of Human Rights in Serbia has been improved through this program, and the first draft of the strategy for further developing the system of criminal sanctions enforcement 2021-2027 has been prepared. This document pays particular attention to the protection of vulnerable groups such as minors, women, the elderly and people with intellectual disabilities.

When it comes to them Freedom of expression and mediaA significant contribution has been made to train judges, prosecutors, lawyers and police officers and to strengthen their ability to protect and guarantee freedom of expression and the media in accordance with European standards, with a special focus on the safety of journalists. Important work also addressed media accessibility for people with disabilities, media literacy and pluralism.

The initiatives in Combating Discrimination This included promoting diversity and equality in Serbia by assisting the Commissioner for Protection of Equality in monitoring hate speech in the media and providing expertise to strengthen the ability of local authorities to incorporate LGBTI rights into their policies and statutes . With regard to preventing and combating trafficking in human beings in Serbia, the program helped train various professional groups (judges, prosecutors, law students, labor inspectors, educational advisors) and strengthen their ability to recognize human trafficking, provide assistance and protect victims. To ensure quality education for all, the program focused on training educators from all 60 Serbian schools participating in the program, as well as exchanges between students from Serbia, Bosnia and Herzegovina and Montenegro.