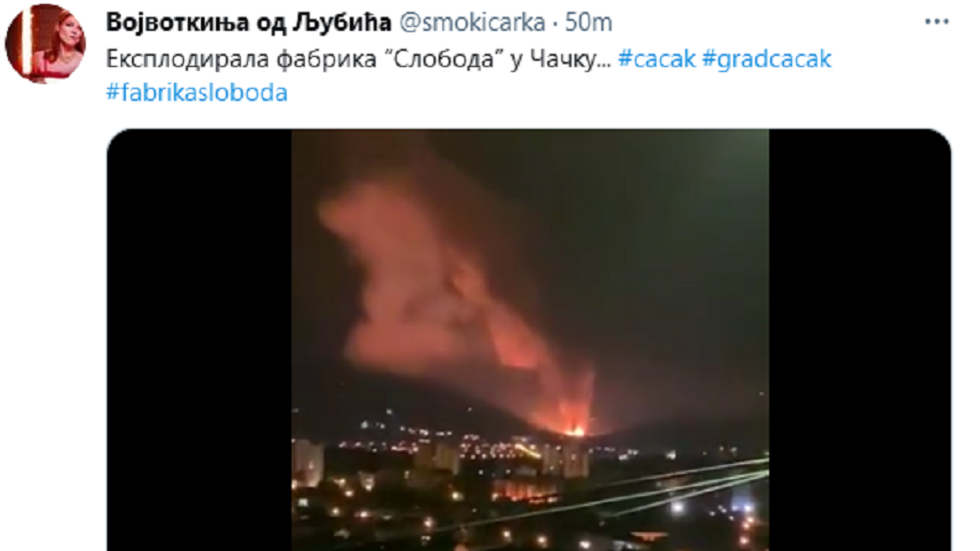 Residents of the central Serbian town of Cacak were torn from their beds by a series of explosions as the local factory that produced ammunition for tanks and artillery apparently went up in flames.

The sustained explosions began at around 1:30 am local time at the Sloboda (Freedom) plant, southwest of Cacak, and reportedly drove some residents out of their homes in a panic.

Videos shared on social media showed a fiery flame lighting up the night amid constant explosions of rounds of ammunition.

“The windows are shaking,” tweeted a woman from Cacak, calling it “an unprecedented human and ecological catastrophe”.

Official information on the extent of property damage or casualties, if any, is not available.

A correspondent for the Serbian newspaper Novosti filmed some residents who fled the city. “Unbearable stench” spread through the city and shrapnel rained down from the sky, he reported.

Ambulances and police responding to the scene were unable to approach the factory for safety reasons.

Founded in 1948, Sloboda employs more than 2,000 people and specializes in the manufacture of tank and artillery projectiles, as well as various types of anti-tank missile propelled weapons. It was heavily bombed during the 1999 NATO war in Kosovo, but has since been rebuilt.