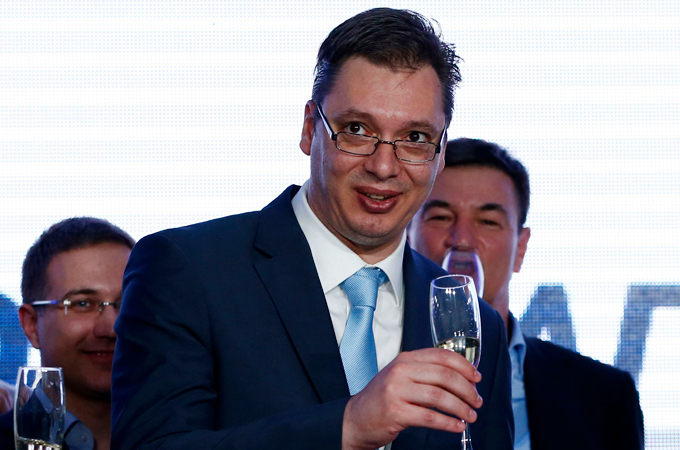 Aleksandar Vucic vows to clean up the country’s shaky finances when a pollster says his party won almost half of the votes cast.

The victory, which rivals the results of the late Slobodan Milosevic during the war years of the 1990s, will see Progressive Party (SNS) leader Aleksandar Vucic become Prime Minister when Serbia starts talks about joining the EU.

Pollster Cesid said the progressives won 48.8 percent of the votes cast on Sunday, which would mean around 157 seats in parliament with 250 seats under the Serbian electoral system. The party itself said it had won 49.3 percent.

“Nobody had such a day,” Vucic said to cheering supporters in Belgrade, according to a report by Reuters news agency. “My goal is not to get rich, my goal is that the people of Serbia live better,” he said.

The SNS forced the early election after only 18 months of coalition with the Socialist Party of outgoing Prime Minister Ivica Dacic and said it needed a stronger mandate to clean up Serbia’s shaky finances.

According to Cesid, the socialists took second place with 14 percent and secured around 50 seats.

It was one of the most convincing victories of a party since the introduction of the multiparty system in Serbia in the 1990s.

In his victory speech, Vucic promised to fight vigorously against corruption and crime and to revive the economy in the troubled Balkan nation of around 7 million people.

“We are facing tough reforms,” ​​said Vucic. “But I am sure that the Serbs will soon be living better than they are now.”

The turnout was 52 percent, slightly lower than in the 2012 general election when the Progressives, former allies of Milosevic, came back to power, the Associated Press reported.

The vote came when Serbia, a longtime international pariah who had instigated wars in the Balkans in the 1990s, officially sought to join the EU amid simmering social dissatisfaction with falling living standards.

Serbia started accession talks with the EU this year after signing an agreement to normalize relations with Kosovo, a former province that was divided in 2008 but whose independence Serbia does not recognize.

Vucic says he needs a strong mandate to carry out painful reforms necessary to help Serbia’s economy, which has been ravaged by mismanagement, wars and international sanctions.

The opposition has accused him of wanting to introduce so-called Russian leadership in Serbia by taking over dominant powers in the state that is deeply divided between pro-Russian and pro-western attitudes.

One dead and nine new cases with COVID-19 – Latest News