The first decision of the new Presidency of the LDK, cause for the clash of party members 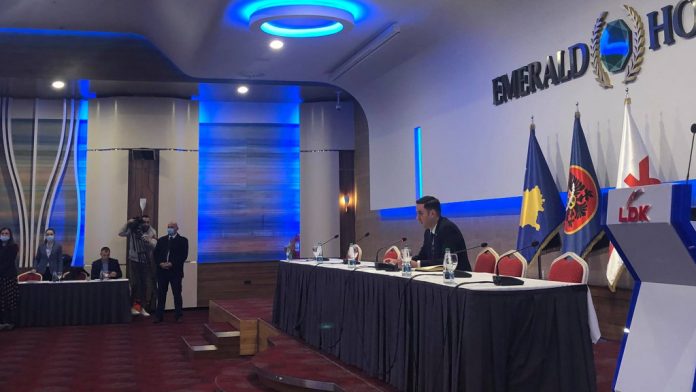 The names proposed by the new chairman, Lumir Abdixhiku, were approved by members of the party’s General Council, which was formed a week ago, on the same day that Abdixhiku took office.

The first decision of the new Presidency yesterday, caused a clash today between the acting Deputy Prime Minister, Driton Selmanaj and the party leaders.

The chairman of the Democratic League of Kosovo, Lumir Abdixhiku, expects to meet next week with his former party colleague, the acting president, Vjosa Osmani.

This was his plan after the meeting he had on Friday with him and with the candidate for prime minister from Lëvizja Vetëvendosje, Albin Kurti to discuss the formation of new institutions.

The main topic of discussion was and will be in the next meeting between them the issue of the president, a post that Osmani is aiming for.

To achieve the goal, she needs the support of her former party MPs, as the other two opposition parties, PDK and AAK, have openly stated that they will not do so.

But Abdixhiku has stated that they do not want one-party presidents, and that to clarify this, he must meet separately with Osman.

Abdixhik’s proposal for a meeting with Osmani was approved yesterday by the new LDK Presidency, which excluded some of the most ‘hostile’ figures with Vjosa Osmani, who were also considered the main culprits for the worst result ever that the LDK of took in the last parliamentary elections.

The incumbent Deputy Prime Minister, Driton Selmanaj, was left out of the new Presidency, as he did not like the proposal of the new party chairman at all.

He said that the LDK collapses even more with these actions, which according to him lose the dignity of those who voted for this party in the last parliamentary elections.

“” Run and run “to meet Vjosa, is nothing but a rush to overthrow even more LDK and the dignity of its 110 thousand CENTRAL voters, LDK✌️”, wrote Selmanaj on Facebook.

But the general secretary of the Democratic League of Kosovo, Imri Ahmeti, relativized Selmanaj’s reaction.

He told Express that the positions of the deputy prime minister in office do not represent the official position of the LDK.

He said that the time of hiding responsibility in the LDK has passed, while emphasizing that the new chairman of the party, Lumir Abdixhiku has the full support of the Presidency to meet with Vjosa Osmani.

“Yesterday in the Presidency, full support was given to President Abdixhiku for the continuation of the talks.

The personal attitudes of anyone do not represent the official position of the LDK.

Liability concealment practices are over.

“Above all, it is good that lectures are not given but reflect in support of the new vision of President Abdixhiku”, said Ahmeti, adding that the LDK must now listen to the citizens.

“Lumiri was the last of the party leaders he met, Mrs. Osmani; in comprehensive consultation with LDK structures.

There was neither “rush” nor “run”!

The LDK is regaining its dignity with very sure steps.

But Selmanaj did not leave without responding again to Ahmeti and Quni, who said that they are not really the new generation of reformists of the party, but according to him, they are responsible for the loss of 50% of the LDK electorate.

Qenkan touches a little on the “new generation of reformers” of the LDK.

I agree that the voice of the citizens should be listened to very carefully, and that the reflection should happen necessarily, but this reflection should start exactly from those who for 20 years held important positions in the LDK, and those who lost in their branches in the last elections over 50% of the LDK electorate.

“It is evil and very low for such people to be repackaged as a reformer or” dream team “!” This time has passed!… LDK “, wrote Selmanaj.

In the February 14 elections, the LDK received only 12.73% of the vote, winning 15 seats in the Kosovo Assembly./express

Ahmeti with Down Syndrome children: Work done with the heart brings a lot of smiles

A attract London, Arsenal returned from the abyss