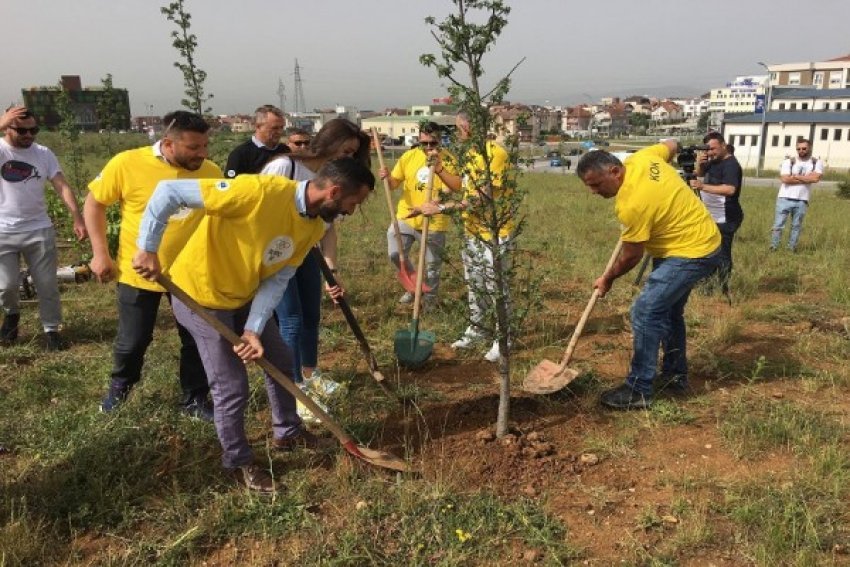 The Kosovo Olympic Committee in cooperation with the organization “Let’s Do It Kosova” and the Ministry of Culture, Youth and Sports are continuing to mark the Olympic Week with various activities.

The second day started with the planting of trees in the Veternik area in the capital, where the Secretary General of the Football Federation of Kosovo (FFK) Eroll Salihu was also present, and is continuing with a football tournament, KosovaPress reports.

The President of KOK, Ismet Krasniqi showed that during the next 10 years in Kosovo will be planted 1,800,000 trees, with the aim of greening the country as much as possible for athletes and the people.

Krasniqi: 1,800,000 trees will be planted, greenery affects all citizens of Kosovo

“Today we are marking a very special occasion, the planting of trees, greenery. It is part of the continuation of the process of planting 1,800,000 trees throughout Kosovo for the next 10 years. So, I believe this is a very important activity because the greenery affects the environment and the air for athletes, but also for the citizens of all Kosovo “, said Krasniqi.

The president of the organization “Let’s Do It Kosova”, Luan Hasanaj called on everyone not to stop planting trees and greenery in the country.

Hasanaj: Where trees are planted, life is planted

“Through this commitment we want to call on all of you to continue planting trees all over the country every day, not only on marked days, but every day, because we have many spaces in which we can plant trees, and where they are planted. trees are planted for life “, said Hasanaj.

Also present at this event was the Secretary General of the Football Federation of Kosovo (FFK) Eroll Salihu, who described the greenery of the country as a symbol of youth and development.

Salihu: Empty spaces to be green, are a symbol of youth and development

“I thank the president and the Ministry of Culture, Youth and Sports that in these important days for the Olympic Movement have undertaken such social activities, which unfortunately in our country are not highly valued. Volunteerism, environmental protection and others, should be introduced in the head of our youth, the self-greening of spaces that are empty is a symbol of youth, a symbol of development, so it is a good step, hopefully with other activities of “Other spheres of life are also fulfilled”, said Salihu.

Finally, a few words were said by the official from the Department of Sports in MCYS, Fitim Arifi, who showed that these types of activities will always have the support of the Ministry of Culture, Youth and Sports.

Arifi: MCYS will always be in support of KOK

This will not be the only activity of today, where in addition to planting trees, a football tournament is also taking place at the stadium “Ramiz Sadiku”, with teams: KOK, MCYS, Football Veterans, Sports Journalists and Estrada .