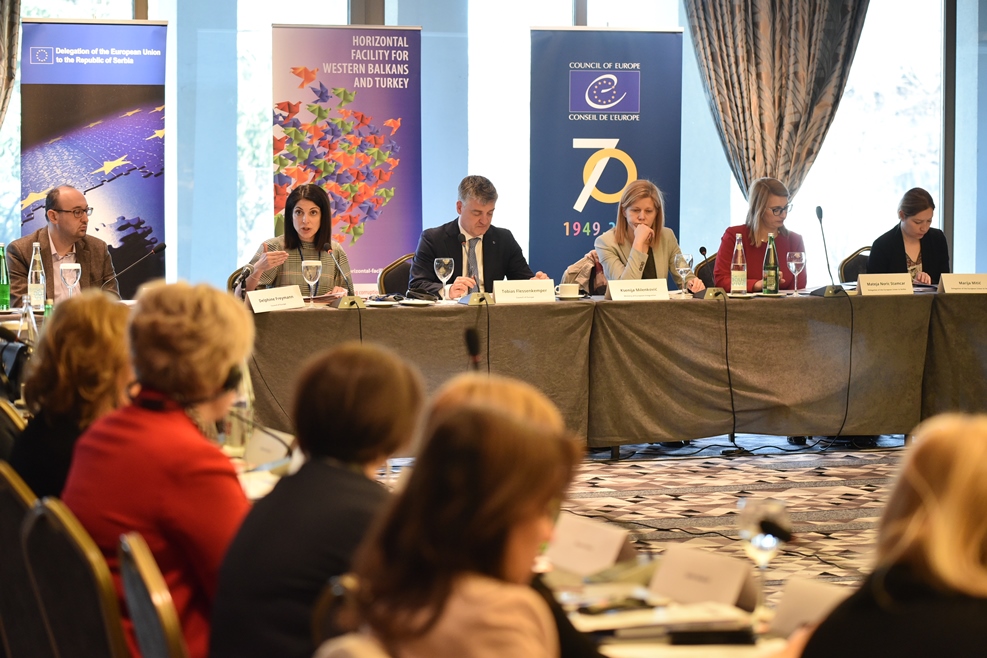 Successful implementation of the joint EU-Council of Europe program “Horizontal Facility for the Western Balkans and Turkey” has given the citizens of Serbia tangible benefits and the program has had a positive impact on the convergence with European standards in the fields of justice, anti-discrimination and Fight against corruption in the country. This was an important conclusion of the third meeting of the Joint Program Beneficiary’s Steering Committee, which concluded today in Belgrade and which took stock of the program results over the past three years.

Tobias Bottle Kemper, The Head of the Council of Europe Office in Belgrade welcomed the participants and underlined the importance of the coordination and cooperation developed under the program. “Countries that, like Serbia, have been negotiating EU accession since January 2014 have started to identify the particular challenges in ensuring justice, combating corruption, combating discrimination and protecting the rights of vulnerable groups.” he said. “The Council of Europe is particularly well positioned to support its member state Serbia, as it can fall back on its standards and is the result of extensive monitoring and cooperation activities with Serbia since 2003. They form the basis for the joint efforts of Serbia, the EU and the Council of Europe are based on our common values. “ Mr. Flessenkemper added.

On this occasion Jadranka JoksimovicThe Minister for European Integration stated that the Government of Serbia is continuing its reform process, which is important for citizens and society as a whole, and that this should lead to Serbia’s full membership of the EU. “The key to successful and sustainable reforms lies in the rule of law, as the fundamental value of the European Union was primarily the negotiations on Chapters 23 and 24. These are the most important and demanding social reforms in terms of scope and depth and accordingly The Serbian Government is endeavoring, through negotiations and partnerships with the EU, to adopt best practices and standards that are in the interests of the citizens of Serbia”She concluded.

“I would like to take this opportunity to congratulate the Serbian authorities coordinated by the Ministry of European Integration for using the program so effectively to achieve a number of impressive results in the areas of rule of law and human rights.” said Mateja Norcic StamcarThe Deputy Head of the European Union Delegation in Serbia highlighted some remarkable results of the first phase of the program. “Some figures will illustrate the results we have achieved: more than 90 legal professionals are now better able to respond to requests for mutual legal assistance in criminal matters, 40% of labor inspectors in the country have been trained on issues related to trafficking in human beings, while the expertise coordination mechanism of the horizontal facility helped support the most complex rule of law issues. ”

Ms. Norcic added: “The European Union wants Serbia’s accession process to be successful. Serbia’s EU perspective has been confirmed repeatedly and the new phase of the Horizontal Facility will support the process, ”she concluded.

The actions under the Horizontal Facility in Serbia have produced many remarkable results. Important efforts have been made to support the reintegration of prisoners into society after their release and the improvement of the prison psychiatric system. Around 400 patients in the Vrsac psychiatric clinic now benefit from individual treatment programs. There are also numerous successes in other areas.

The representation of national minorities in textbooks for primary and secondary schools has been improved. 19 pilot schools, 2,150 students and 250 teachers have worked to make their school environment more democratic. Under this program, the Serbian authorities also asked the Venice Commission for opinions on the constitutional amendments related to the judiciary, and the program facilitated the discussion of these amendments.

The event was attended by representatives of the beneficiary institutions directly involved in the implementation of this joint program of the European Union and the Council of Europe, as well as civil society organizations.

The three-year horizontal facility program runs from May 2016 to May 2019; The aim is to help the authorities in Southeastern Europe better comply with European standards in the following key areas: Ensuring justice, Combating economic crime, as well as Combating discrimination and protecting the rights of vulnerable groups. In Serbia, EUR 3.97 million has been allocated to seven projects covering all key areas of the Horizontal Facility.

Results of the Horizontal Facility projects in Serbia