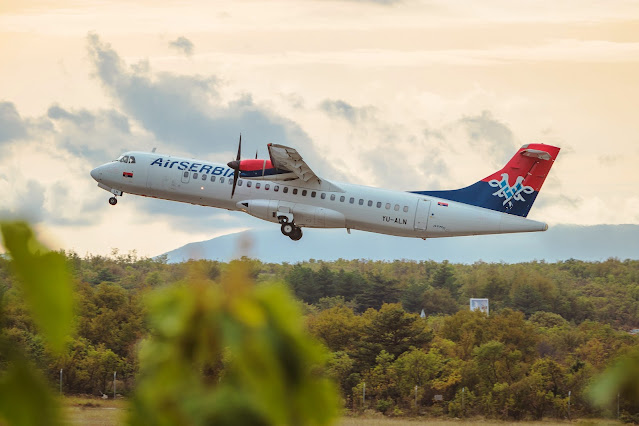 Already during the summer it became clear that the Italian Dolomites would be the Christmas destination for this year. As Wizz Air decided its nonstop Sarajevo – Treviso flights would only be seasonal and operate until the end of October, the Lufthansa Group seemed the only available and logical option (as used many times before on the same route). However, when Wizz Air declared that they are fully closing their base in Sarajevo and discontinuing all flights from November, Air Serbia decided to react and offer special prices for the affected routes through Belgrade. At the time, I checked the new special fares. The price per ticket with Air Serbia was approximately 40% cheaper than with any other company flying from Sarajevo. My personal preference would still have been to take Lufthansa Group and fly with Airbus family rather than ATRs (especially considering that the flight from Belgrade to Venice takes approx. 2 hours with the ATR). But as this was a family trip and saving for each ticket was considerable, as well as total trip duration exactly the same, the final decision came to Air Serbia.

Before the flight, I was presented with the opportunity to check in online, which is exactly what I did. At the check in page, I was assigned random seats, but also had the opportunity to buy more comfortable seats (ones in the back in the case of the ATR) with prices starting already from 3 EUR. As Sarajevo Airport still doesn’t support any digital boarding passes, I still had to go to the counter and collect printed boarding passes there. I arrived at the airport 90 minutes before the flight, and, as always, in the case of Sarajevo Airport, it was much more than enough. Entrance to the main building of the airport is now going through the newly opened entrance doors where new check-in desks and counters are located. The old ones (closer to arrivals) are still at the same place, but simply not being used for now. Security and passport control was super fast, and 6 minutes after collecting my boarding passes, I was already at the gate. As this part of the day is the busiest one, the waiting area at the gates was pretty full. The airplane from Belgrade was late almost one hour upon departure (as the captain later said due to waiting for transger passengers). Boarding started at 15:10 from gate 5, via the stairs inside the airport building and short walk straight to the plane.

The airplane was a modern ATR 72-600, just over 5 years old and recently added to the Air Serbia fleet. We were greeted by the cabin crew who were wearing face masks during the whole duration of both flights. At 15:42 (62 minutes late) we took off from the runway and bit more than 30 minutes later already landed in Belgrade. After landing, we were taxing for more than 10 minutes until reaching our parking position, from where we took the bus to the terminal building. When we reached cruising altitude, we were given a bottle of water and cookies. Total number of people on this flight as I counted was 51, which means around 70% of occupancy. Most of them staying in Belgrade, while less than 20% of passengers headed towards the transfer area and gates.

The second flight from Belgrade to Venice was planned to depart on time as the planned aircraft previously arrived from Skopje on time. The waiting area at the gates was pretty empty and with many available sockets for charging devices. Boarding started on time and the bus took us to the aircraft. This time it was an ATR 72-500, more than 25 years old veteran in Air Serbia’s fleet. As soon as you enter the cabin, the difference compared to the newer ATR 72-600 is visible. The cabin was in a much more rustier condition and the overhead compartments were slightly smaller. On this flight there were only 23 people on board, which means around 30% occupancy. The flight to Venice took 1 hour and 40 minutes in total and we landed at 19:45 local time. While on board, we again received a bottle of water and cookies, while also this time it was possible to buy food and drinks from Air Serbia ELEVATE bar. Flying mostly at 6000 meters with good weather, we were able to see nice views of Tuzla, Banja Luka, Pula and finally Venice during final approach.

Generally, it was a satisfactory experience, and most importantly reaching the final destination in the shortest possible period of time and best prices offered. Also, as someone previously mentioned in the trip reports, on both flights mechanics were present from JAT Tehnika, sitting in the first row (emergency exit) during the flights and assisting with luggage during the boarding.