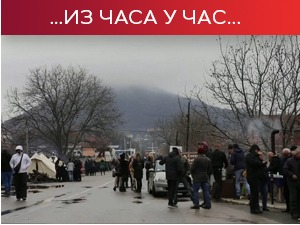 Professor Milan Krstić of the Faculty of Political Sciences said that Serbia had the right to submit a request to KFOR for Serbian forces in Kosovo and Metohija, but that the answer was certainly negative.

“It was announced by our president when it was questioned why such a request is being submitted at this moment, but I think that the logic is actually of a tactical nature, to remind the international public that such a provision exists and that such a provision has not been fulfilled since 1999. year until today,” stated Professor Krstić.

He added that it seems clear that KFOR will not decide something like that, especially after Gabriel Escobar’s statements that the US does not support the militarization of the problem, that is, that they give firm security guarantees that there will be no change in the military situation on the ground.

Krstić pointed out that now all that remains is diplomacy.

“Invoking international law, invoking Resolution 1244, the Kumanovo Agreement and a diplomatic struggle that involves a whole range of means. We have used various means since 1999, i.e. since 2000, primarily after the change of regime, until today. Some of them involved the fight against the declaration of independence, after the declaration of independence, the struggle to withdraw recognition and prevent new recognition, entering into negotiations with Pristina from 2011, which were first technical, and then turned into political and status ones. This is our terrain where we can try to let’s make some progress,” Krstić pointed out.

Speaking about the arrest of Serbs in Kosovo and Metohija, Krstić said that accusations of war crimes were a confirmed and known mechanism and that they were even used in some property disputes.

“It is a form of pressure either to leave or to sell that property, to leave that territory, and it was also on a political level, let’s remember Oliver Ivanovic as the best example, how many years he was imprisoned until he was eventually acquitted. These are standard mechanisms and I wouldn’t be surprised if it continues,” said Krstić.

He assessed that Kurti is aware of the fact that Serbia is almost the only one in Europe that has not imposed sanctions on Russia and that it seems to him that he is trying to provoke a Serbian reaction at this moment and to present any harsher reaction of Serbia as a prolonged action of Russia in these areas and tried to mobilize support of the West.

“I think that so far something like that is not going well for him and that this intention has somehow been noticed by Western actors and that is why such a plan will not be able to go through,” said Professor Krstić.

Your browser does not support the video tag.