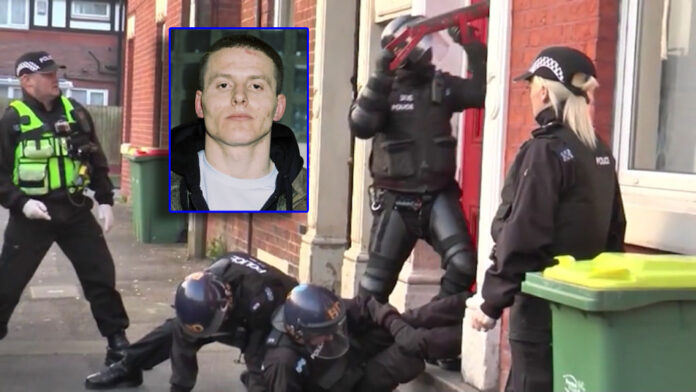 The two Albanian emigrants, Jetmir Buçpapa and Ermir Hysenaj, are the ‘brains’ of the theft of the century in England. The theft of 53 million pounds or over 62 thousand euros, marks the largest theft that has occurred in the English state.

In the early hours of the morning of 22 February 2006, the largest robbery in English history took place.

The bandits, disguised as English police, took hostage the manager of ‘Securitas Depot’ in Ton Bridge, Kent County, Dixon (52) and his family. ‘Securitas Depot’ served as a cash warehouse to supply bank counters and ATMs.

The warehouse contained 20 203 million in cash.

The thieves were armed with pistols and Kalashnikov model ASH 82, Albanian production. They neutralized the 14 armed deposit guards.

Although they filled a Renault truck, a Volvo car and a Vectra, the bandits managed to get only 53 million pounds, leaving another 150 million pounds in storage, because the truck had a capacity of only 7.5 tons.

To load the cars, the thieves used supermarket carts and a small-capacity pick-up truck.

Albanians played key roles in organizing the theft of the century

Ermir Hysenaj, an employee of ‘Securitas Depot’, assisted the gang with footage and sketches of the depot premises, where the money was stored, as well as other data on security, protection and alarm systems in case of theft.

His information on the 4-meter-high perimeter walls, barbed wire barriers, shutters and special anti-machine barriers with titanium alloy, as well as the closed-circuit camera system, were crucial to the successful realization of robbery.

The turn of the century was planned down to the smallest detail over a period of 18 months.

The English police special forces stopped the car only after they punctured the tires with bursts of bullets.

After much searching almost all the gang members were apprehended by English police, but not all.

Millions of pounds were found in various places such as cars, houses, garages, hairdressers, etc., used by bandits as safe havens.

Bucpapa was jailed for 30 years, but so far milionë 30m of the stolen money has not yet been found.