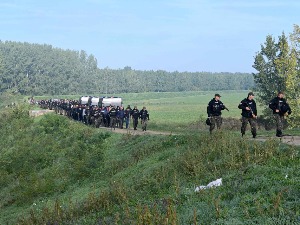 The Minister of Internal Affairs of Serbia, Aleksandar Vulin, attended in Srpski Krstur, the action of the operational strike group and members of the Gendarmerie aimed at preventing the smuggling of irregular migrants to Hungary and suppressing the smuggling of weapons and narcotics, as well as criminal acts with elements of violence committed by migrants.

Members of the operational strike group, which was formed by order of the minister in July of this year, in a special police operation carried out in the town of Srpski Krstur, in the municipality of Novi Kneževac, found about 200 irregular migrants on the banks of the Tisa river and seized a certain amount of weapons and money.

“Members of the operational strike group and the Gendarmerie found about 200 irregular migrants in an improvised camp, in the forest on the banks of the Tisza River, and confiscated a certain amount of weapons and money. A number of migrants were transported to a reception center for migrants accompanied by the police, and a number were submitted to the competent prosecutor’s office for further action,” said Vulin.

The minister said that Serbia is a serious, organized and humane country where the law must be respected and where the law applies to everyone.

“Serbia is not and will never be a place where criminals and scum who traffic in people and make money from their pain and suffering will gather and live. Every smuggling gang will be discovered and broken, and its members will be punished in accordance with the law of Serbia. Our country it did not cause and is in no way responsible for the migrant crisis and there will be no parking for migrants, and especially there will be no place for gathering scum and bandits,” said Vulin.

Vulin pointed out that, thanks to the responsible policy of President Aleksandar Vučić, who recently discussed important issues of migration policy with Hungarian Prime Minister Orbán and Federal Chancellor of the Republic of Austria Nehamer, Serbia has proven that it is a reliable partner and a country that is able to respond to all challenges. brought about by the migrant crisis and protect its population.

Members of the operational strike group and the Gendarmerie confiscated three pistols, an automatic rifle, knives, machetes, as well as a certain amount of money.