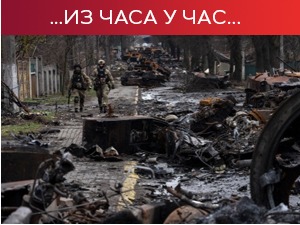 The first tanker with 35 million liters of diesel fuel from Russia has arrived in Brazil, announced the Minister of Mining and Energy of the country, Adolfo Sachida.

“Approximately 35 million liters of diesel fuel from Russia arrived at Santos port. Other operations for the import of Russian diesel fuel are also being carried out,” Sachida said.

According to the minister, the next delivery is expected in October. He mentioned that the Government intends to encourage competition and reduce energy prices in this way.

The “South” operational command announces that a missile attack was carried out on the Odesa region, and that an industrial facility was hit, Unian reports.

“Before dawn, a rocket attack was carried out in the Odesa region. Two rockets, probably Iskander, hit an industrial infrastructure facility, damaged an electrical substation, several surrounding buildings. A fire broke out in one of the private garages, which was immediately extinguished. There were no human casualties.” the report states.

Russia vetoed the draft resolution of the UN Security Council which was initiated by the USA and Albania, and which condemns the referendums on the annexation of four Ukrainian regions to Russia. Brazil, Gabon, India and China abstained, reported the TAS correspondent.

China calls on all parties to the conflict in Ukraine to show restraint and make efforts for negotiations and a ceasefire, China’s Permanent Representative to the United Nations Chang Yun said at the Security Council session.

Ukrainian President Volodymyr Zelenskiy claims that the Ukrainian army has achieved “significant results” in the east of the country and mentioned Liman, which is under the control of the Russian army, but without giving further details.

After Russian President Vladimir Putin signed the documents on the accession of four Ukrainian territories to Russia, Zelenskiy demanded accelerated admission of Ukraine to NATO.

A celebration was held on Red Square in Moscow after the signing of the agreement on the annexation of four Ukrainian regions to the Russian Federation. The President of Russia said that the people made a decision in a referendum and that “there are four regions that are new Russian regions”.

European leaders condemned the annexation of four areas in Ukraine to Russia. The President of the European Commission, Ursula von der Leyen, said that the annexation of Ukrainian territories is illegal, and the European Council rejected and condemned Russia’s move in a joint statement. US President Joseph Biden stated that the US “will gather the international community to condemn these moves and hold Russia accountable”.

Gazpromneft spokesman Sergej Kopriyanov said at the emergency session of the UN Security Council regarding the damage to the Nord Stream 1 and Nord Stream 2 gas pipelines and the spill of gas into the Baltic Sea that 800 million cubic meters of gas had leaked. According to Koprian, this is equivalent to Denmark’s three-month supply.