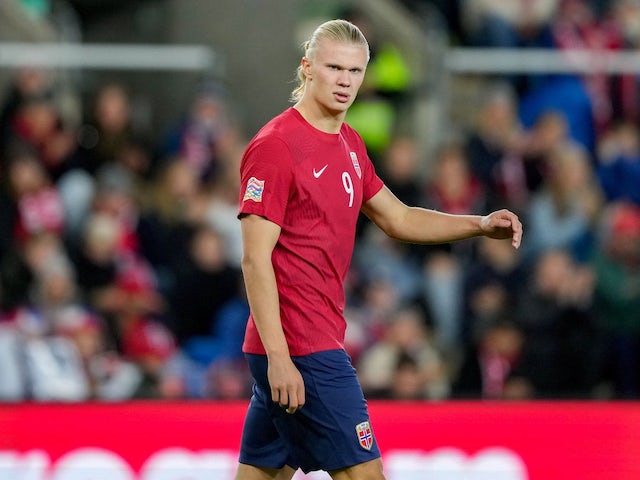 Aleksandar Mitrovic scored his 50th goal for Serbia to earn his country a 2-0 win over Norway this evening, securing promotion to the top tier of the UEFA Nations League in the process.

The Fulham striker continued his red-hot form in front of goal to add a second for his side – his 12th goal in his last 11 games for club and country – after Dusan Vlahovic had given them the lead in Oslo.

Norway’s own star man Erling Bride Haaland was kept quiet at the other end as his scoring streak came to an end at the worst possible time for his country, who surrendered top spot and promotion at the final hurdle.

Serbia went into the final match of the campaign knowing that only a win would be enough to leapfrog their hosts, and despite the presence of in-form Haaland on the opposition, their own strikeforce stole the show.

Vlahovic broke the deadline three minutes before half time to put Serbia in command and shift the onus onto Norway, but Stale Solbakken‘s side had no answer.

Instead, it was the visitors who got the all-important next goal, and it was a landmark one for Mitrovic as he became the first Serbian player to score 50 goals for his country, doing so in just his 76th appearance.

It was a telling contribution which also saw Mitrovic move level with Haaland as the top scorer in the 2022-23 Nations League with six goals – an award they will now share – while his tally of 14 goals overall in the Nations League is a new record .

Elsewhere in Group B4, Emil Forsberg‘s equalizer just before half time earned Sweden a 1-1 draw with Slovenia which keeps them in the group and relegates their opponents in the process.

Forsberg’s strike canceled out an earlier wonder goal from Slovenia’s Benjamin Seskowho broke the deadlock with a Marco van Basten-esque first-time volley from a tight angle.

So in the Nations League this evening, Czech Republic will drop down to League B after losing to Switzerlandwhile Spain pinched an 88th-minute winner against Portugal in Braga to pip their Iberian rivals to top spot and a place in the semi-finals.