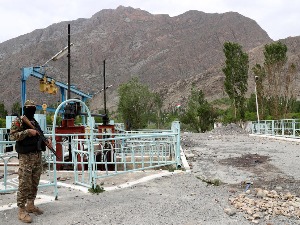 The agreement was reached at a meeting on the sidelines of the Shanghai Cooperation Organization (SCO) summit in Uzbekistan, the Kyrgyz President’s office announced.

It was agreed to form a commission that will investigate the conflicts, as well as the withdrawal of the armies of the two countries from the border, reports RIA Novosti.

Earlier today, the representatives of the two countries agreed to end the clashes on the common border while the negotiations between the two sides continue.

Fighting broke out along the border yesterday when Kyrgyz and Tajik forces exchanged fire following a border dispute while their leaders attended a summit in Uzbekistan, Reuters reported.

Kyrgyzstan previously said Tajik forces had opened fire again on several of its border posts after a brief skirmish this week, a fresh escalation of tensions between the two countries.

Kyrgyz troops returned fire during these incidents, which occurred along the entire border, the border service said.

In its statement, Tajikistan accused the Kyrgyz forces of shelling one of its border posts and seven villages with “heavy weapons”.

Russian military bases are stationed in both countries, and Bishkek and Dushanbe maintain close ties with Moscow, which called for an end to hostilities this week.