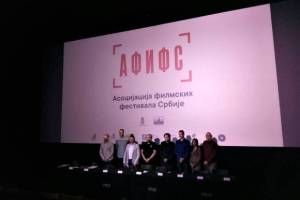 BELGRADE: The Association of Film Festivals of Serbia / Asocijacija filmskih festivala Srbija (AFIFS) was founded in Belgrade with the support of the Film Center Serbia and currently comprises seven festivals.

The main aim of the memorandum signed by the founding members is to work together for future joint ventures and measures to promote and improve public viewing in the field of domestic cinematography, as well as decentralizing the cinema infrastructure, promoting domestic films and with the support of the Film Center of Serbia (FCS), joint support for professional development in the field of cinematographic activities, exchange of expertise, experience and best practices in the field of festival screening.

“In every country, film festivals are part of the cinematographic infrastructure and therefore they are important for the Serbia film center. FCS has already helped these festivals in various ways, but this year we decided to set up an association on their initiative to give access to facilitate various funds at home and abroad, “said Gordan Matić, the director of Film Center Serbia.