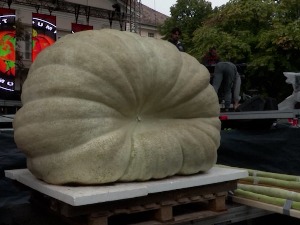 The new Kikinda “Days of Madness” record is a pumpkin weighing 716.5 kilograms, which was raised by Tibor Kokai from the Hungarian town of Tapiosentamarton. This is his third participation and second victory at the event, and as he says, the decisive factor was the seed, which he had a hard time finding at an auction.

“I am happy about the record, but it was not easy to nurture this gin, because there was a drought. It was planted exactly 153 days ago, and it was necessary to water it with more than 600 liters of water every day. However, the effort paid off and I will definitely participate and next year,” says Tibor Kokai.

The longest lunatic is three meters and 10 centimeters.

The “Crazy Days” event is being held for the 37th time and is visited by tens of thousands of guests from Serbia and abroad.

It is known for its rich program, attractions, concerts and a sumptuous gastronomic offer of pumpkin dishes and sweets.

“I can make pies, rolls, cakes, gourabies. Juices, jams, potages, various things. Everything that can be made from other fruits and vegetables, can also be made from pumpkin,” says Radojka Vujadinov from the ethno-association “Suvača”.

There are even cosmetics, beer and pumpkin cider.

“Both are quite difficult to make, because the pumpkin first needs to be cut, cleaned, baked in the oven. Then it goes into beer in cooking, and in cider it is also mixed with apple and then we get that juice.” , points out Slobodan Suvajdžin from Kikinda.

Kikind’s “Crazy Days” end on Sunday, and from this year the event is on the map of the World Pumpkin Breeders.