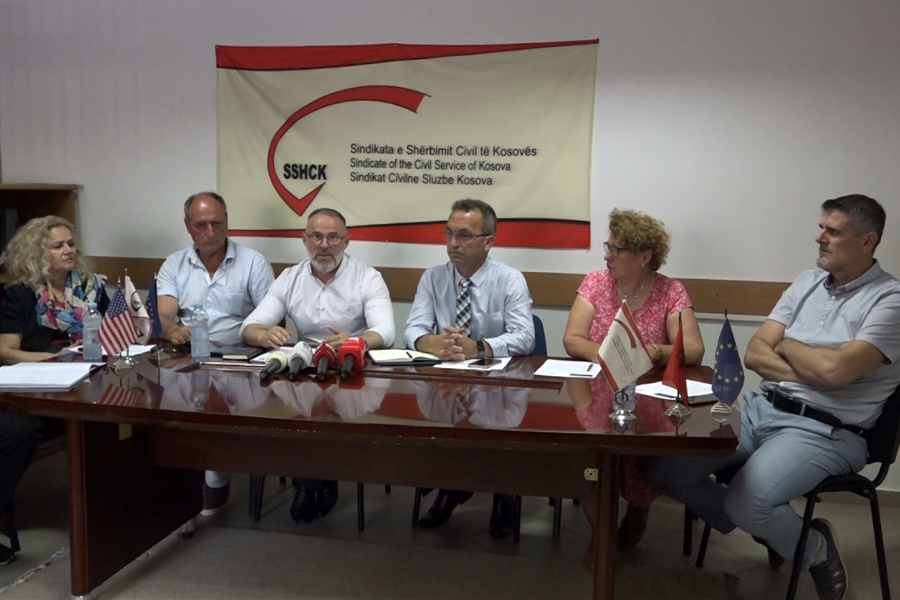 They even say that they are ready to address the highest instances of international justice. On International Civil Servants Day they urgently demanded the proceeding of the Wages Law.

“We do not agree in any way and this issue if it continues by this commission and by the Parliament of Kosovo if approved, we will ask the highest possible instances, even from abroad that this action is not taken by by the Assembly of Kosovo. “I invite the President of the Assembly of Kosovo or the President of the country, Mrs. Vjosa Osmani, as the guardian of the Constitution to act urgently and not to allow such actions or to allow interference in the justice system”, he said.

Zymeri added that the only support in protecting the rights of civil servants has been the Independent Oversight Board. He stressed that 2021 is the first time that the government does not take any action to mark this day.

“After this conference, I will address the President of the Assembly of Kosovo with the request for a meeting and the ultimate request for the removal from the agenda of this item, that it seems to you that everything is fine, only this left unresolved and addressed. The issue of boards being discussed is another issue that does not belong to us. But the Independent Oversight Board is an interest, a direct violation of our rights. And this in one way or another is a salute that the government makes to civil servants. “To do what I want and you have nothing to do,” he said.

The President of the Public Administration Union, Ali Gashi mentioned the requests of the civil servants, emphasizing that the processing of the Law on Wages is urgent.

“We as two unions have assessed as a necessary need and as an immediate, urgent request is the drafting and processing of the Law on Wages by governments, and with special emphasis on this day we ask the government to urgently process the law in Parliament, as it is absurd to play with civil servants. “The urgent request of both unions is that this law be processed as soon as possible”, he said.

He has warned that if their demands are met with deaf ears, then they will take trade union measures.

“Keep your hands off the civil service, because you will face the power of the unions, you will face our power and you believe that it is not a small power. “Do not put us in an undesirable position, but if you put us we will react”, he declared.

For this, he announced that they had meetings, they sent a request to the Prime Minister, but they did not receive a response.

Both unions have demanded three additional salaries in the case of civil servants’ retirement, recognition of work experience during the 1990s, application of health insurance and signing of collective and sectoral contracts.