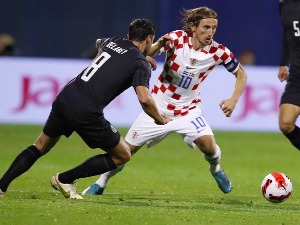 Croatia is in a match with Danish took the lead at the beginning of the second half of the game with a goal by Borna Sosa. In the 77th minute, Christian Eriksen shot from more than 20 meters under the crossbar of Livaković’s goal and tied the score.

Not even two full minutes had passed since the tie, and a nice action in which several players participated was ended by a good shot by Mayer, for the final 2:1.

Austrians held up well in the first 45 minutes against Frenchbut Kylian Mbappe scored a nice goal in the 56th minute, after a penetration of about forty meters and an undefendable shot.

Less than ten minutes later, Olivier Giroud put an end to the game – Antoine Griezmann received the ball on the flank, sent a good cross, and the experienced center forward of Milan knocked the ball into the net for 2:0.

Croatia is now the leader of Group 1 A of the League of Nations with 10 points, the Danes have nine, France five and Austria four points. In the last round on September 25, Austria will welcome Croatia, and Denmark will welcome France at the same time.

The Dutch were defeated as guests in Warsaw Poland with 2:0, while Belgium, as the host in Brussels, was better than Wales with 2:1. These two selections will decide the winner of the group in the last sixth round.

Tonight the Dutch pushed the Poles. They took the lead in the 13th minute after a great move, and the goal was scored by Cody Gakpo after assists from Dumfries.

The final result was set in the 60th minute by Ajax player Steven Bergwein after a double pass with Jansen.

Belgium is to victory over Wellsom arrived on the wings of Kevin de Bruyne. The Manchester City player shot from 18 meters in the tenth minute to give his national team the lead, and then assisted Michy Batshuayi in the 38th minute to make it 2:0. Wales managed to reduce the hosts’ advantage in the 50th minute with a goal from Kiefer Moore.

Before the last round, the Dutch have 13 points, three more than Belgium, which they defeated 4:1 on the road. This means that the Belgians will need a convincing victory in Amsterdam for first place. Poland is the third-placed team with four points, followed by Wales with only one point won.

After Greece and Kazakhstan, the first place in the C division of the League of Nations was won by i Turkeybut the Turks barely escaped defeat at home in Istanbul Luxembourg – 3:3.

Results of the Nations League matches played on Thursday: